If so, this reporter would like to speak to you, according to the watchdog group TSA News.

Oh, by the way, the TSA is apparently searching cars now: 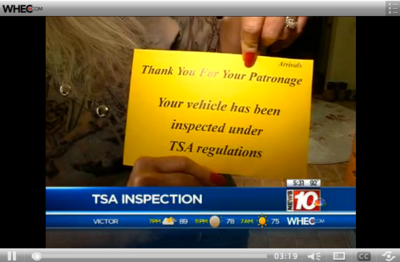 According to this report from WHEC in Rochester, NY (same source), a woman returning from a trip was not pleased to see the above message inside her car, which she had parked with a valet service. (Arguably the worst thing about it is being told "Thank You for Your Patronage," but that's debatable.) A TSA rep said only valet-parked cars were being searched, because they spend some time right outside the terminal and so could "cause damage to the front of the airport." This is now the standard? You know what else could cause damage to the front of the airport? Cars parked in the unloading area for a few seconds, or how about every car driving by? Assuming they explode, which is what this is supposedly about.

Here's why they're searching valet-parked cars at the moment: because they can. Without breaking in, at least, because unlike with short- or long-term parking, you give the keys to the valet. And according to the report, it's not even a TSA agent—or someone with actual training—who searches the car. It's the valet himself. "We asked, 'You're required, they tell you, you have to search the car? Valet Parking Attendant Frank [D.] said, 'I have to do it.'" Nothing against Frank D., but when were valet parking attendants promoted to the first line of bomb defense?

Wait—the TSA says this is a "false report" and it was the valet's fault:

It has been reported that TSA Officers at airports are now searching cars. The news started to spread after a story ran this week stating that a woman found a notice informing her that her car had been searched by TSA.

The short version: While we deploy numerous layers of security, TSA officers are not inspecting cars or mandating that they be searched.

In this case, it turns out the car was searched by an employee of a car parking service.

They're talking about you, Frank D. Why did you slander the TSA by implying this is an official TSA policy? There will be consequences.

[Reporter] Berkeley Brean asked, “Are the cars in the short term lots and long term lots getting searched as well?”

John McCaffery, TSA, said, “No, those vehicles that are in the garage, short term long term parking, even if they carry pretty large amounts of explosives, they would not cause damage to the front of the airport. But for those who use the valet, the car could be there for a half hour or an hour so there is a vulnerability.”

Hm. It does sound like he is fully aware of and has previously considered the policy, but maybe he was only expressing his understanding of the policy implemented by rogue Valet Parking Attendant Frank D., or the unknown person who told Frank D. he "had to do it." Because the agency seemed to be saying there was no TSA involvement at all. Odd.

Wait—according to a follow-up report by WHEC, the agency's position is actually that the policy was "a joint decision between the local TSA office and the Rochester Airport Administration." Well, somebody's head is not going to roll, at least, as soon as they find out who's not responsible.

This is the just latest example of mission creep, as the government continues to push the limits of what we will tolerate in order to theoretically be kept 100% safe. If they get caught and people complain, they will often scuttle back to where they were before, which is a good sign that, in fact, that policy wasn't necessary to keep us 100% safe (which is impossible anyway).

So, just on the off chance that this is happening at airports where Frank D. isn't in charge of security, contact the reporter mentioned above if it happens to you.

Thank You for Your Patronage.

Feds Say Use of Bogus “Promissory Notes” On the Rise