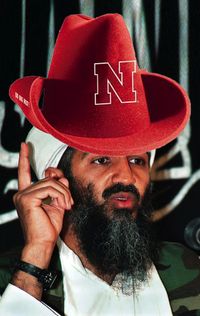 Inshallah, it is a first down
(Photo: Jeff W.)

Not really. Or at least there is no (unclassified) evidence of that, but I think that by the same token we can't entirely rule it out.

I'd like to be able to say that this picture of Osama bin Laden in what appears to be a Nebraska Cornhuskers foam novelty cowboy hat was included in the Abbottabad Commission report (see "Report: Bin Laden Wore Cowboy Hat "to Avoid Detection From Above," (July 8)) but as I noted yesterday, one of the most glaring flaws in that report is that it doesn't provide a complete description of the alleged hat. (So, again, we can't entirely rule out this possibility.) Thanks to David B. and Jeff W. for this artist's impression. 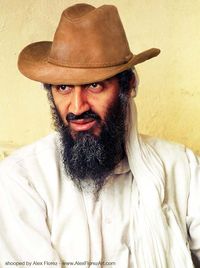 The Bad and The Ugly
(Photo: Alex Florez)

On the other hand, graphic artist Alex Florez sees bin Laden as a more traditional hat man, which is probably closer to the truth. He was a pretty conservative guy. (Thanks to Alex as well.)

To be honest, the 'Huskers hat would seem to provide more protection by virtue of its size, but is probably also more easily spotted from space.

Of course, neither of these would really offer much protection from, let's say, a CIA asset with binoculars sitting in a nearby building looking at the face under the hat, but according to the report, belief in the existence of any such person is only speculation at this point.

Fly With Your Pants Down, Lose Your License, Judge Rules