This is not one of those cases, ever-increasing in number, in which somebody is apprehended because of his or her own misuse of social media. According to the report in the Bradenton Herald, they caught this 23-year-old robbery suspect through good old-fashioned physical surveillance. And I didn't read the entire stream, but I don't think he made any admissions in the course of his extremely ill-advised public comments. But he did post those comments on the Facebook page of the Pasco County Sheriff's Office after it posted his picture as "Fugitive of the Day," and those comments are still worth sharing.

In part he was responding to comments by other people who made fun of how his ears looked in the "wanted" photo, but this seems like the most relevant excerpt: 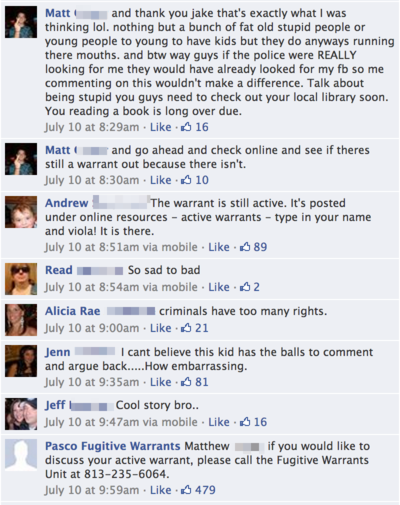 "Andrew" and the police were right—the warrant was still active.

Apparently having made bail, the suspect is still posting on that same comment thread. His most recent post (as of the time I hit "publish") was 13 minutes ago—

—apparently trying to get a date out of it.

You Thought Things Were Bad Before