That's seven years longer than they were married, and the case isn't over yet.

The most recent case, that is. According to the report, the former spouses have been involved in at least 28 lawsuits against each other, not counting the divorce proceedings, which ended more than a decade ago. Judges have called the conduct of both parties "appalling," "shocking," "unacceptable," and "thoroughly inappropriate," among other things, and the Ohio Court of Appeals pointed out years ago that "both of them ought to know better."

That's because they are both law professors.

The report doesn't say why the marriage failed, but I'm guessing they decided they didn't like each other. The case file for the divorce proceedings, which lasted five years, had 1,400 entries in it, which an expert said was four years and at least 1,000 entries more than most. "Holy cow, that is extremely rare," he opined. Another one agreed it was "highly unusual." A third expert "refused to be quoted," said the report, "fearful he would be sued" by one or both of them.

The post-marital battles have included both support and custody issues, and two of the 28 cases have been appealed all the way to the Ohio Supreme Court, although that court declined to hear them. 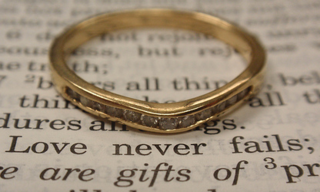 Who's to blame? Who knows? Judges have written that the woman showed "unrelenting hostility" toward the man, tried to make sure he had no relationship with the two children, and has "flatly refused to obey court orders." (On the other hand, she hasn't hit him in the head with a basketful of pocketknives, so it could be worse.) But "both parties have behaved in an appalling manner," according to the Court of Appeals, and a magistrate said in July that both of them ought to be called out by the state bar.

"It is frightening to this Court," she said, "that either [party] is teaching current law students the boundaries and ethics of our profession. Both should be thoroughly embarrassed and ashamed of their behavior." Yes indeed.

Do feel free to browse the Domestic Law category for other examples of love gone wrong, including:

Clap On, Clap Off, Case Dismissed