No further details are available yet—TMZ reported it without posting the actual documents—but it appears that Black Keys singer Dan Auerbach will give up some significant assets as part of a divorce settlement finalized this week. His ex-wife will be receiving over $5 million in cash, one of the family homes, a 2012 Toyota Highlander, and Bob Dylan Hair. 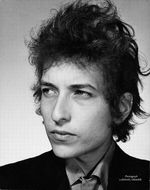 Tangled up in suit

Just what "Bob Dylan Hair" might be, no one seems to know for sure. The Hollywood Reporter called it "Bob Dylan's Hair," but that's misquoting the TMZ report, which purports to be quoting from the settlement papers and doesn't use the possessive. The general assumption is indeed that this is something like a lock of Bob Dylan's hair that someone obtained, somehow, as a piece of music memorabilia. Dylan has plenty, or he did at one point, anyway, so that is certainly possible. And "Bob Dylan Hair" could mean the same thing anyway. But why would the musical half of the couple agree to give that up?

I don't think we can rule out the possibility that they have a cat or something named "Bob Dylan Hair," or at least I'm not going to rule that out until I see the actual documents.

According to the Hollywood Reporter, the divorce has "grown increasingly ugly in recent months." There has been at least one allegation of arson, which normally is in fact legally sufficient to make a divorce "ugly." More amusing is that Auerbach is apparently also in a feud with former White Stripes singer Jack White, who has accused Auerbach of "copying his musical aesthetic." White is also getting divorced, and has reportedly demanded that his children not be placed in the same school as Auerbach's daughter. "I don't want the kids involved in any of that crap," White has said, but noted in the same email that he did not want to "have to be sitting in kids [sic] chairs next to that a——" for the next "12 f—ing years." So there's that, too.

According to TMZ, it has reached out to Dylan to ask about his hair, but so far has received no response.