The chancellors of those days were busy administrators who would stand no academic nonsense: Lord Chancellor Ellesmere in the reign of James I ordered that the Warden of the Fleet should lay hold on an equity pleader who had drawn a replication of 120 pages where 16 would have done, “and shall bring him unto Westminister Hall … and there and then shall cut a hole in the middle of the same engrossed replication … and put the said Richard’s head through the same hole … and shall show him at the bar of every of the three courts within the Hall.”

Alan Harding, A Social History of English Law (1966) (via Generalising).

Why did that ever go out of style?

Here’s another source, this one apparently quoting the original language of the order (the citation is dated 1596, which could be the date of the order itself because Ellesmere was Lord Chancellor to Elizabeth I): 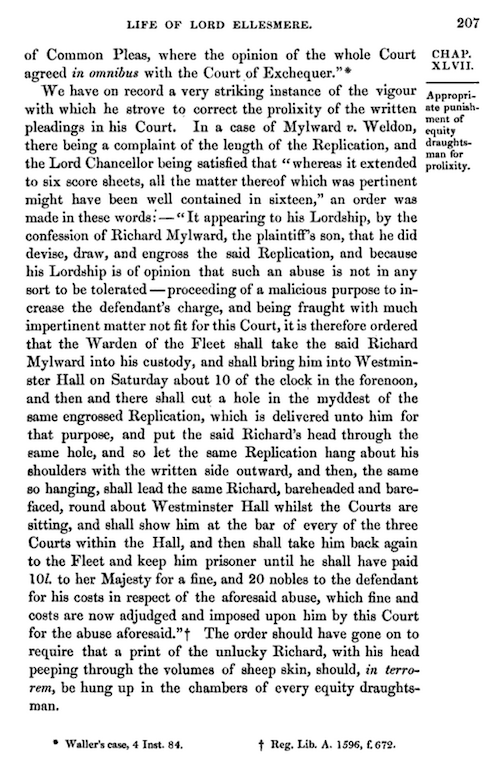 John Lord Campbell, The Lives of the Lord Chancellors and Keepers of the Great Seal of England: From the Earliest Times Till the Reign of Queen Victoria, v.2 (London 1848).

That last sentence is also a fantastic idea.

“Carlos the Jackal” Still Worried About His Image

If You Can’t Read This, You Can Still Get a Gun Permit in Iowa