That's how the New Times describes a trial beginning today in West Palm Beach. Prosecutors say that Rose Marks, "the 62-year-old matriarch of a local gypsy family," cheated clients out of $25 million over a 20-year period. Seventeen million of that came from just one person, romance novelist Jude Deveraux. These are astounding numbers for what we generally think of as a small-time and somewhat shady fringe activity, and it looks like fortunetellers can make a lot of money too.

Marks was indicted along with nine family members in 2011, as a result of what the DOJ cleverly named "Operation Crystal Ball." The indictment charged them with preying on vulnerable (and rich) people via the time-honored method of telling them they were cursed but that luckily the curse could be lifted by turning over money, which is well known to be the "root of all evil." The money (and/or other valuables) needed to be turned over to the psychic to be "cleansed," after which it would be returned. It wasn't returned, although you could say it was "cleansed," if by "cleansed" you mean "laundered." In all, the defendants are charged with stealing at least $40 million this way. In addition to the cash, prosecutors seek forfeiture of personal psychic property including a home; a couple dozen vehicles including a Rolls Royce, a Bentley, and a boat; and "approximately $1,884,630 worth of gold coins." 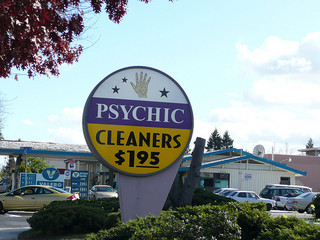 Quite a bargain
(Photo: Christian Heilmann)

While this is an ancient kind of scam, there is always some room for creativity. In this version, the defendants allegedly claimed to be "conferring with Michael the Archangel for his advice and counsel," which I suppose is way better than talking to a lawyer as long as you can be sure it's Michael's voice coming out of the speakerphone.

Despite the involvement of an archangel, one might ask why a psychic scam is a federal matter. The answer to the jurisdictional question is, of course, the mail and wire fraud statutes, which can make almost any crime into a federal case. Often these are used against organized crime (and I'm happy to include gangs of bogus fortunetellers in that category), but they can be misused, and it is fair to ask in this case whether the feds don't have anything more federal to do. There have also been allegations of prosecutorial misconduct, and a magistrate has called some of the government's actions "shameful" and "very troubling." For one thing, the indictment included charges involving victims with whom the government had never spoken, which became awkward when at least one of those victims filed an affidavit saying he had not been victimized.

Of course he most likely had been, because he paid a psychic $500,000 for "life-coaching," something that almost certainly involved an astronomical (astrological?) level of bullshit. The problem is that people are allowed to believe (and spout) bullshit in many circumstances. That's why fortunetelling and astrology and psychic claims are not illegal even though there is zero evidence to support them (see item three in this list), and as the Sun-Sentinel notes there have been very few trials in such cases. It may not be easy to prove the necessary intent when spiritual or quasi-spiritual beliefs are involved, and there are First Amendment implications too, which is why every leading Scientologist is not in jail right now because that is some serious bullshit right there, ladies and gentlemen. I guess I'm saying I'm ambivalent about this prosecution because psychic claims are nonsense and often fraudulent, but it's also troubling that the federal government is willing to push the envelope in order to prosecute an essentially local crime.

And isn't it supposed to be looking for terrorists?

Finally, if you are surprised that fortunetelling can be such big business, you have not been paying attention. See, e.g., "Feuding Newport Beach Gypsy Fortune-Teller Clans Take Dispute to Court" (Dec. 7, 2007).

Penalty for BlackBerry Use in Conclave Really Could Be Excommunication