Well, this is a hoot: 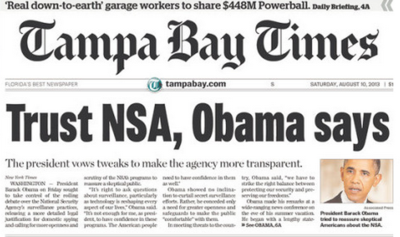 Uh, how about no?

According to Bruce Schneier, who is right a lot:

As Edward Snowden's documents reveal more about the NSA's activities, it's becoming clear that we can't trust anything anyone official says about these programs…. Both government agencies and corporations have cloaked themselves in so much secrecy that it's impossible to verify anything they say; revelation after revelation demonstrates that they've been lying to us regularly and tell the truth only when there's no alternative.

Rebuilding trust is not easy … but the path involves transparency, oversight and accountability.

The President discussed transparency on Friday, and said there would be more of it in the days to come. Remarkably, he said this with regard to the NSA, and yet did not burst out laughing when he said it (unless they left it out of the transcript). The man is a true professional. Of course, this President has been committed to transparency from the beginning, when he declared his would be the "most transparent administration ever." How's he doing? Well, you may recall that he got an award for transparency in 2011—the one he accepted secretly. ("The irony is," one participant said, "that everything the President said [about transparency] was spot-on. I wish people had heard what he had to say.") As discussed here, the ACLU has described Obama as worse than Bush with regard to secrecy, and Bush was repeatedly described as worse than Nixon.

Who, as you may also recall, was not known for transparency.

But there was the President again on Friday using that word. What's he got on tap? Let's find out!

First, DOJ will "make public the legal rationale for the government's collection activities under Section 215 of the Patriot Act," the one it says authorizes bulk collection of phone records. And DOJ did release a "white paper" legal memo on the topic. It would be truly weird, though, if the President actually thought that releasing a legal memo written by his lawyers providing a rationale in support of his legal position had anything to do with "transparency." Whatever the merits of the arguments might be—and they're probably bullshit—that's advocacy, not transparency. He knows the difference.

Second, he said, the NSA will "release information that details its mission, authorities, and oversight." Same point. I could tell you what my goal is, what I'm asserting as authority, and who is supervising me, without telling you a single fact about what I'm actually doing. This appears to be the information he was talking about (PDF), and again, this is advocacy, not transparency. I understand that there will be many things an intelligence agency could not reasonably disclose, but the point here is that they aren't disclosing anything so this has nothing to do with "transparency."

Third, the NSA will "put in place a full-time civil liberties and privacy officer." Wait, a full-time guy just for that? Let's not go overboard. There are budget issues to consider, and he only has 40,000 employees to monitor.

Um, excuse me, I believe you have
my PRISM

The President also released a picture of the nominee for that office (right), for whom they are currently preparing the boiler room.

Of course, none of those things advances the goal of "transparency" at all. All they do is provide additional channels by which we will be told whatever the government wants to tell us. In other words, they really are just saying "trust us." Sorry, that's not how it's supposed to work.

Lawsuit Seeks $1 Million for Those Who Bought Full-Price iPhone