Speaking of patents, I haven't yet gotten around to posting this one, which was tweeted by Prof. Sarah Burstein (@design_law): 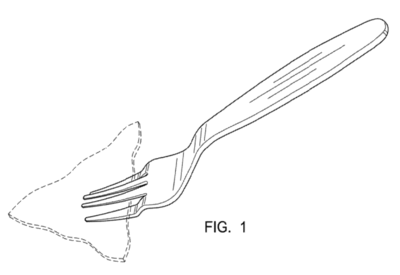 The inventor claims "the ornamental design for a snack chip eating utensil, as shown and described." The description notes only that each image provides a different view of the snack chip eating utensil, except for the last line of the description, which helpfully states that "[t]he broken line showing … in FIG. 1 is included for the purpose of illustration only and forms no part of the claimed design."

A design patent application, it appears, does not have to include the stuff you'd normally see about the shortcomings in the prior art that the claimed invention is intended to overcome. I can only think of three reasons for this one:

I have no problem with any novelty item, really. Number 2 solves a "problem" Americans really don't need solved, and I seriously doubt that Number 3 would meaningfully offset the inevitable increase in dip consumption (whether that is intended or not). Maybe I should leave that to the experts, but I don't think a snack chip eating utensil is going to make us collectively any smaller.

Just Say No to Internal Checkpoints. Preferably After Breathing Helium.

Woman Won’t Have to Pay for Her Own Cavity Search