The Marin Independent Journal reports that a gentleman up there has sued Blue Man Group and its management company for allegedly injuring him at a 2011 performance in San Francisco. According to the report, the plaintiff alleges that “[d]uring said performance, a large blue plastic or rubber-like ball was thrown into the audience without warning to Plaintiff. In an attempt to protect himself, Plaintiff extended his left arm in the air to block the ball from hitting him in the face.”

Presumably Plaintiff claims he was actually struck by this projectile, whether on the arm or in the face, but if so the report doesn’t mention it. (Maybe he dislocated his shoulder?) The complaint does charge that “Plaintiff was not provided advance warning that items would be thrown into the audience, of which he was a member,” and that as a result of this conduct Plaintiff suffered “shock and injury to his nervous system” as well as “great mental, physical, and nervous pain and suffering.” Plaintiff claims to have more than $40,000 in medical expenses.

The group’s website does not appear to have a specific warning about the possibiity of ball-flinging, but the FAQ section does make clear that the show may not be entirely limited to the stage. It notes that the rows closest to the stage are referred to as “the poncho section,” and that patrons in this area are given ponchos to wear “because sometimes materials splash the audience.” I also note that this promotional clip for the latest version of the show—apparently called “Now With Balls”—actually ends with the Blue Men flinging large plastic or rubber-like balls at the camera: 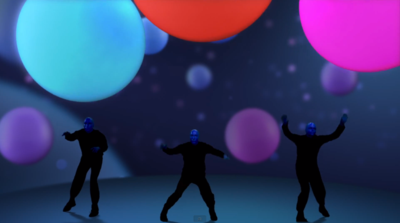 How much warning do you need?

The lawsuit was filed in June, and according to the court’s website the plaintiff still has not filed proof that the defendants were served. Plaintiff’s lawyer failed to show up for a hearing on that issue last month, so maybe that says something about his enthusiasm for the case.

The report says that Blue Man Group had no comment, but then they never do.

Court Rules Icelandic “Girl” Can Use Her Own Name