You have until September 26 to bid on some of the personal items that former congressman Jesse Jackson Jr. and his wife bought with campaign funds. Turns out you're actually not supposed to buy personal items with campaign funds, so they will both be spending some time in federal prison during the next year or two. And because the dress code in federal prison doesn't include fur-trimmed capes (to my knowledge, anyway), and also to help pay off the judgment against the defendants, said capes and other items are now being auctioned off. 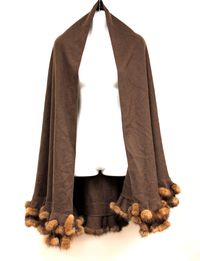 Here, for example, is a luxurious mink-trimmed cashmere cape from Edwards-Lowell of Beverly Hills that will have all the neighbors talking! True, they'll be saying things like "I didn't know mink testicles grew that big" or "looks like your tribbles are trying to escape," but they'll be talking. Estimated value: $800. Current bid: $540.

In August, Jackson was sentenced to 30 months, and his wife to 12, for spending about $750,000 in campaign funds on everything from car repairs to a gold Rolex and mink capes. As the judge noted, this was not a case involving financial necessity—the Jacksons Jr. earned almost $350,000 in 2011—or the occasional impulse buy. The defendants pleaded guilty to making 3,100 personal purchases with campaign funds over a seven-year period. Although only 12 items are on sale at the moment, according to the Washington Post the defendants helped themselves to "multiple flat-screen TVs … and $2,300 in transportation services at Disney World." 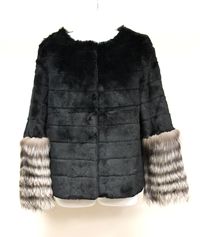 Both defendants were sentenced to less than the maximum. The judge said she had taken their record of public service into account but rejected suggestions that mental-health issues contributed to the misconduct. Both will probably serve less than the full sentence, with community service to follow. 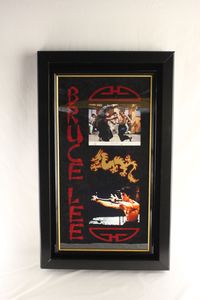 Say, you could do the community a service by bidding on this double-framed and matted 8×10 color photo of Bruce Lee in "Fist of Fury," autographed by the legend himself. This 38" by 23" collectible comes with a certificate of authenticity and was purchased at Caesar's Palace in 2008 by a former congressman. Slight damage to frame. Estimated value: unknown. Current bid: $600.

Jackson apparently was also a collector of Michael Jackson (no relation) memorabilia, as there are five pictures autographed by the singer also for sale. The Thriller 25th anniversary collectible is drawing the most interest; current bid is $1,685. According to the auction list, Jackson Jr. bought at least five of these MJ collectibles on one visit to Caesar's Palace in August 2009, so if you contributed to his campaign that year this might be where your money went.

This auction of course pales in comparison to those that followed Bernie Madoff's conviction. See "Buy Some of Bernie Madoff's Stupid Crap This Weekend," Lowering the Bar (Nov. 12, 2010). In just that one auction, the U.S. Marshals put up, among many other things, 67 belts, 20 leather jackets, 12 watches, two wine chillers (capacity: 56 bottles each), one red loveseat, one bronze armadillo and, no kidding, 224 pairs of men's shoes including 88 identical pairs of his favorite brand and ten pairs made out of orange leather.

Nobody compares to the Madoff, of course, although Scott Rothstein tried pretty hard. The Jacksons may have helped themselves to multiple flat-screen TVs, but as far as I can tell they didn't have a single gold-plated toilet.

All Briefs Should Now Be in Comic-Book Form