As you know, the answer to the question whether you can get arrested for Driving a Bar Stool Under the Influence is plainly "yes," because it will be considered a "vehicle" for purposes of the motor-vehicle laws. But another problem that I don't think we discussed the last time this happened is unless your motorized bar stool complies with all the rules of the road, there are likely to be other citations in your future as well.

Assuming you survive. The most important issue here is safety, of course, and someone driving a motorized bar stool is not unlikely to have just left a bar, where he probably got drunk, and the odds of him wearing a helmet are not high. Case in point: this one from Puhoi, New Zealand. NZN News reported last week that a 62-year-old man sustained serious head injuries after he fell off one of these vehicles. There were no other vehicles or obstacles involved—he just fell off. As you can see, the vehicle in question was not equipped with a seat belt, which also may have contributed to the accident. 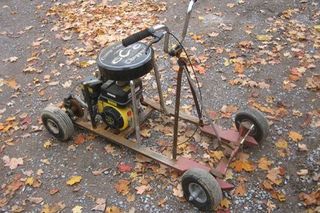 Nor did it have the required lights or any other safety equipment, further demonstrating why the thing was not "road-legal." The one involved in the earlier incident (right) suffered from some of the same

problems, and it may have been even more dangerous since it had a shorter wheelbase and appears to have been taller, posing a higher risk of tipping over. (Note: I've sat on a few bar stools but am no engineer.) Of course, if you're hammered, you'll have no trouble tipping over either of these designs.

There is some room for disagreement as to how these things are classified. The police report describes the one in New Zealand as a "recreational vehicle," which certainly seems fair even if we tend to use that term differently here in the States. The report then goes on to say, though, that the vehicle was "a go-kart with a bar stool on top, often described as a motorised bar stool." That might provide pretty good fodder for a drunken argument—is it a go-kart with a bar stool on top, or a bar stool with a motor and wheels attached? And if one tips over but there is no one else around to hear it, does it make a sound? Again, though, legally it doesn't make a difference because either way it would be considered a "motor vehicle" under relevant laws.

Inspector Mark Fergus, who described the vehicle as "not road-legal," also said that police were investigating "who actually owns the mechanical bar stool," so maybe it is also a case of theft. Inspector Fergus also stated that "whether alcohol was involved will be part of our investigation." I understand that normally you wouldn't want to speculate, but a case where somebody fell off a motorized bar stool he just drove out of a pub might be an exception.

Activist Convicted of Pelting School Board Members With Grapes