Recess itself is still allowed, for now, but it appears that students will have to spend it standing quietly in one place:

As CBS 2’s Jennifer McLogan reported Monday, officials at Weber Middle School in Port Washington are worried that students are getting hurt during recess. Thus, they have instituted a ban on footballs, baseballs, lacrosse balls, or anything that might hurt someone on school grounds.

“I think we need the soccer balls, the footballs and everything, so we can have some fun,” one student said.

But the students will have no such option anymore. They were just informed that during recess, football is out and Nerf ball is in. Hard soccer balls have been banned, along with baseballs and lacrosse balls, rough games of tag, or cartwheels unless supervised by a coach.

According to a press release on the school district's website, the reason it has nerfed recess is because a construction project has limited the space available for recess. "With children in such close proximity to each other," the statement says, "it is not safe for them to be engaged in unstructured play with hardballs…. Absent the confined space within which recess must temporarily be held, such restrictions would not be necessary." 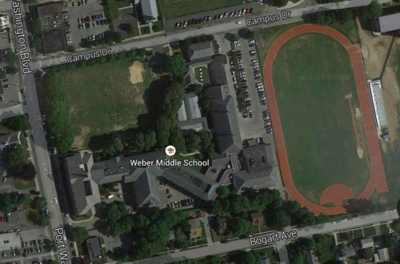 No construction is visible on this Google Earth image, but these images are not necessarily current. In the corner of the school's yard (top left) can be seen a backstop of the kind once used by our barbarian ancestors for the bloody sport known as "baseball," but presumably the construction project is intended in part to eliminate that brutal memory. Assuming there is construction in progress that restricts space in a way that somehow renders "unstructured play with hardballs" potentially deadly, it seems fair to wonder why they don't use the high school's much larger field (right).

The little snowflakes would have to cross a concrete parking lot to get there, it's true, but with the right mix of crossing guards, helmets, pads, and rubberized concrete covers it might be possible to accomplish that once a day without too many casualties.

There's yet another field just to the north, but that is across the street so I assume that is out of the question.

According to the CBS2 report, the district's superintendent said that the change in policy was warranted "due to a rash of playground injuries," although if that's true it's funny that the press release didn't mention any of those. Some cynical parents reportedly believed the change was "really about liability and lawsuits," and I suppose that's possible.

There is no shortage of stories like this, of course, including this very similar one from a couple of years ago that led to international ridicule and at least one frankly childish headline. See "Playground Covered in Pillows for Safety Reasons," Lowering the Bar (Nov. 22, 2011); "School Partially Lifts Ban on Playing With Balls" (Dec. 1, 2011). And those were Canadians freaking out. Of course, maybe they caught this disease from us, but it seems to be raging there now. According to this National Post report, the first day of school in Toronto was a terrifying ordeal; one neighborhood was scoured by dozens of officers and a K-9 unit after a kid went to the wrong classroom, and "experts were consulted" to discuss options after another one got off at the wrong bus stop. The bus company is now said to be considering RFID tags for children so that they can be tracked at all times. What could go wrong?

Back in the land of the free and the home of the constantly terrified, a school in Arizona recently took steps to keep an armed man off its property. That'd be fine except that he was a police officer. Scott Urkov dropped his kid off at elementary school on his way to work, prompting calls from "some parents who were concerned about the fact that there was a fully armed officer on campus." Huh? Level-headed school officials then did the reasonable thing by calling the officer and asking him not to wear his uniform and gun to school again. Wait, what?

The officer said he had been advised by the department not to comment, but that was after he posted "Are you freaking kidding me?" on his Facebook page.

Look, we all want kids to be safe, but just like with adults, there is no such thing as absolute safety. Terrifying events are terrifying, but the fact is that the chance that your kid will be seriously injured at school or that you will be hurt in a terrorist attack are infinitesimal. Take reasonable precautions (which do not include the TSA) and then go on with your life, for God's sake.

Besides, you should be reserving your terror for things that are really worth worrying about—namely, giant Asian hornets! Aaaiiiiieeeee!