When not even reality TV wants you around, isn't it time to call it quits?

The exciting news that a TV network had offered Toronto's crack-smoking idiot mayor, Rob Ford, his own reality TV show was followed not long thereafter by the equally exciting news that the show, "Ford Nation," had been canceled after exactly one episode. A Sun News Network vice-president claimed that the premiere had attracted 100,000 viewers, but said the show could not continue because of the "time and production requirements."

Translation: he went through all their booze the first night.

At least they had the power to fire him, which Toronto's city council does not seem to have. It did take away most of his authority on Monday, at a "raucous" meeting during which Ford for some reason was running around the room, and managed to knock over another lawmaker in the process. (The video, available here, shows that it was an accident and that he immediately helped her up. Still, it was another example of his reckless, drug-addled buffoonery.) 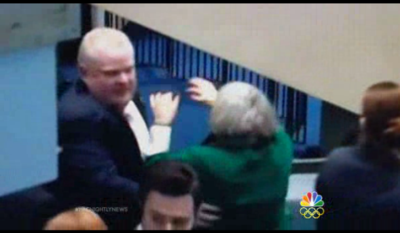 Ford insisted, as you would expect, that he was being persecuted and that the vote to strip him of his powers was essentially a "coup d'etat." Is this really an "emergency" situation, Ford demanded? "A chorus of 'Yes!' came from spectators behind him."

In what I thought was an especially nice touch, during a speech before the vote Ford compared the city council to Saddam Hussein and himself to Kuwait.

The vote cut Ford's office budget by 60 percent and removed him from the executive committee, which means he will have no legislative power. He can still keep the title of "Mayor" and retains "the ability to represent Toronto at official functions," which is certainly good news for Toronto.

Ford said he "absolutely" wanted to continue being mayor and thought that the city should allow him to do so. "They're not going to find another Rob Ford," he said. That's probably true.

How You Know When Your Supreme Court Argument Is Going Poorly