After a three-year investigation, the Metropolitan Police have concluded that their initial suspicions of foul play were unfounded in the case of Gareth Williams, a 31-year-old intelligence agent whose naked body was found in his bathtub inside a padlocked bag.

Although a spokesman acknowledged that some people—like the coroner—had drawn what seemed to be the “logical inference” that someone else was involved, he said that based on all the evidence, or actually the lack of it, police had decided that the death was “probably an accident” and were closing the case.

Williams, described as a “math genius,” was a communications officer at GCHQ, the UK’s equivalent of the NSA—”equivalent” in terms of its respect for the law as well as its function. See, e.g., “Leaked memos reveal GCHQ efforts to keep mass surveillance secret,” The Guardian (Oct. 25, 2013) (quoting memos expressing concern about a “public debate which might lead to legal challenges”). He had been “secunded” to the Secret Intelligence Service, often known as “MI6,” at the time of his death, however. Because MI6 handles primarily foreign intelligence (MI5 is the domestic agency), it works closely with GCHQ, as you would expect.

Occasionally their directors are even forced to testify together, as happened last week. See Michael White, “Britain’s spy chiefs make daylight debut like a trio of Draculas in winter sun,” The Guardian (Nov. 7, 2013).

After Williams had failed to show up at work for a week, an officer found his body in the tub inside a fully zipped-up bag, the zippers of which had been locked with a padlock. None of his DNA was found on the lock and his prints were not found on the edge of the bathtub. No drugs or alcohol were found in his system. There were some traces of DNA in the flat from which “it had not been possible to gain full DNA profiles,” but no conclusive evidence that third parties had been present. There was some evidence that Williams may have engaged in certain bondage practices—he once had to call for help after tying himself to a bed—and police apparently believe this might explain why he might have sealed himself in a duffel bag.

Still, there was that nagging issue as to how he might have locked the bag from the inside.

At the coroner’s inquest, an expert witness (described as “an expert on confined spaces”) who is about the same size as Williams said he had tried and failed to do this no fewer than 300 times. The bag is big enough, he testified. “You can get into the bag and you can zip the bag up. That’s not a problem.” 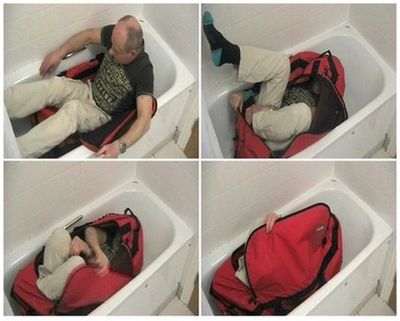 So what IS the problem?

Turns out the problem is locking yourself in, although you wouldn’t think it’d take 300 attempts to be sure of that. “You can’t access the lock from the inside without damaging the bag, so it cannot be padlocked from the inside,” he said. “Even Harry Houdini wouldn’t have managed it.”

The coroner concluded that Williams had been “unlawfully killed” by a person or persons unknown, and his body then put inside the bag after his death. But after another year of investigation—and an unspecified level of “co-operation” from MI6—it seems that a small thing like absolute physical impossibility has not deterred the police from concluding that Williams managed to do this himself. In fact, the spokesman said he was satisfied it was “theoretically possible” that Williams had locked himself inside the bag, although the report did not explain why. Maybe the 301st time is the charm?

I’m sure this sequence is coincidental

“Now at the end of our investigation,” the spokesman said, “based on the evidence, or where we have been unable to find positive evidence, we believe that it is a more probable conclusion that there was no other person present when Gareth died.” Well, “more probable” than what? If the only other hypothesis was that “Voldemort did it,” I would agree. Otherwise I think the only conclusion you can draw from the lack of evidence is that you can’t draw any conclusions at all.

Maybe I’m being too cynical here, though, because it’s not like this is the first time this sort of thing has happened. See “Police Pretty Sure Man Tied Himself Inside Sack and Shot Himself Before Jumping Into River,” Lowering the Bar (Aug. 19, 2013). On the other hand, that sequence of events was at least physically possible. Just really, really unlikely.