Well, I guess you've done everything you could then. Uh, good work.

This incident was widely reported in the Turkish media in September. See, e.g., "Yargıtay kararını mezar taşına yapıştırdı," TRT News (Sept. 27, 2013). A Turkish woman (or at least one who speaks Turkish) sent it to me the other day. She explained that under Turkey's Notification Law, court notifications are made through the postal service (although it looks like the law has changed since this incident). That is, postal officers there are similar to process servers in the U.S. in that they go out and try to locate people to ensure they get notice of court action. If the intended recipient is not present at his or her last known address, the officer has to investigate. As in the U.S., under certain conditions, a notification will be considered effective if it is posted on the front door of the recipient's residence.

According to the report, in this case the officer seems to have had some difficulty locating the guy he was looking for. Turns out there was a good reason for that, but the officer still did his best. In his handwritten note to the court (at the top right of the image below), he explained: "Tebligat K.35 maddesine göre muhatap mefat ettiğinden kabir taşına yapıştırılmıştır. Tebliğ edilmiştir." 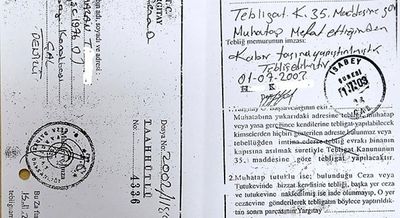 Which roughly translates to: "Under Article 35 of the Notification Law, the notification was pasted on the recipient's gravestone because he is deceased. Notification has been duly made."

I know this one sounds like an urban legend, but I don't think it is. Although as far as I can tell this is the first mention of it in English (thanks again, source), it was widely reported in Turkish, including in the report linked above by the Turkish Radio and Television Corporation. There is a picture of the notification, obviously, and at least according to Google's very rough translation abilities the text on the notice says what the report and my source claim it says. (Most importantly, kabir taşına means "gravestone.") It is a little troubling that the "return of service" note is dated 2007 but as far as I can tell the story wasn't reported until 2013. But that does happen sometimes. Basically, it's the picture that seals it for me.

According to this summary of the Notification Law, Article 35 states that if the recipient has moved and left no forwarding address, the notice is to be attached to the door of the place where the recipient was last known to reside. I guess that seems about right here.