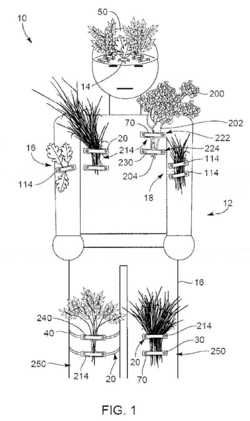 Having trouble hiding from something you'd like to kill? Maybe you've considered covering yourself in plant life. Good idea, assuming you're outdoors. But depending on how you're doing that, you may be infringing.

Improbable Research notes that Patent No. 8,359,664, entitled "Systems and methods for providing modular camouflage," was issued in January 2013. The alleged breakthrough here appears to be not the use of plants, but rather the little devices used to attach them to oneself. Or, rather, any little devices of that kind.

"At least some implementations of the present invention take place in association with a modular camouflage system that includes [a] plurality of individual retention devices," the patent states. "For example, in some implementations, the retention device is attached to the clothing of the user via a tack and clasp system, mating magnets, Velcro and/or a system of straps and/or elastomeric banding." So apparently any and all of these "implementations" of the general idea of tying a plant to your head (or other part) are claimed.

It continues, "The user may insert camouflage material into the retention device to further conceal the user and the user's equipment," but I think "may" is intended as "should," because if the user doesn't do that the user is not going to hide successfully from anything.

To be honest, nothing about this seems remotely novel. I mean, Carl Spackler was doing this kind of thing decades ago, for God's sake, although I guess it is unlikely that he remembered to patent his methods.