The headline (originally “Stolen prosthetic arm discovered in a second hand shop“) is not as good as the classics “Headless Body in Topless Bar” or “Dead Body Found in Cemetery,” but it’s still pretty good. 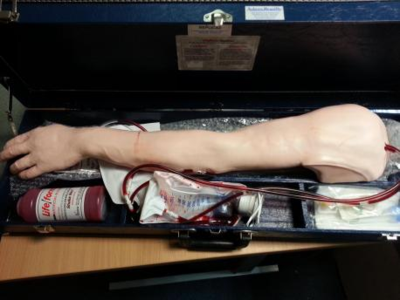 The arm, which was located by police during a burglary investigation, is not the kind of prosthetic arm that might be attached to a person, but rather is a model that according to the report is “primarily used for training people to take blood samples.” (Didn’t say what else it may be used for, but waving at planes and slapping people more than a couple of feet away seem most likely.) This explains what I first thought was a large bottle of hot sauce (lower left) but is in fact the fake blood that the trainee would attempt to draw.

Detective Constable Adam Woolman was quoted as saying that the police had “recovered a number of items from a second-hand shop, including this arm,” during the course of an investigation. Because this particular item “is an unusual article,” he said, police hoped that someone would recognize it and help them find the rightful owner or the people who stole it. “I believe this item may have been in a vehicle either on or around November 25,” the detective constable said, so if you saw a vehicle with an arm in it around that date, in the vicinity of Bournemouth, please contact the Dorset Police.