When we last checked in with the TSA—or, at least, the last time I mentioned it—it had just been outwitted by a child. Again. See "TSA Embarrassed by Nine-Year-Old Boy" (Oct. 11, 2013).

Possibly still smarting from that incident, the agency has now reportedly cracked down on weapons that might be carried by a nine-year-old, or rather carried by things that a nine-year-old might carry. Okay, I have no idea what age group this might or might not be appropriate for—what I'm trying to get to is the fact that a TSA agent in St. Louis confiscated a two-inch-long toy gun from a sock monkey dressed like a cowboy. 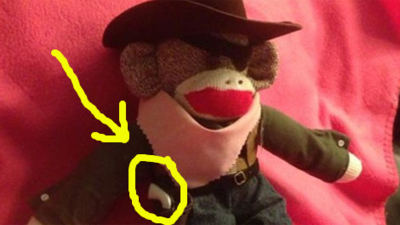 According to Phyllis May, she and her husband were returning to Seattle from St. Louis when the sharp-eyed agent made the discovery. May has a small business making and selling unique sock monkey dolls, and was carrying two of the dolls and some sewing supplies with her in a carry-on bag. One of the dolls, "Rooster Monkburn," was outfitted in cowboy attire, including a monkey-sized version of the eyepatch John Wayne wore in "True Grit" and "Rooster Cogburn," and a monkey-sized version of the firearm he shot people with. Actually, "monkey-sized" is an exaggeration (unless when you hear "monkey" you think of the pygmy marmoset, but you probably don't). It was sock-monkey sized.

After finding the weapon-like item in May's bag, the TSA agent took her aside and the following took place:

The TSA agent told May she would have to confiscate the tiny gun and was supposed to call the police.

“I said well go ahead,” said May. “And I said really? You’re kidding me right, and she said no it looks like a gun.”

“She took my monkey’s gun,” said May, who has retained her sense of humor.

Emphasis added. What does that even mean?

According to the Internet Movie Firearms Database—which is a thing that exists—Rooster Cogburn wielded a Colt Single Action Army revolver, a gun commonly used in Westerns because it was commonly used in the Old West. According to the NRA, which would probably know, the gun pictured here was one that John Wayne actually waved around in True Grit, Rio Lobo, and other films. As you can see, Rooster Monkburn's weapon—and I think this is kind of remarkable—appears to be historically accurate, more or less. John Wayne is said to have also used one with ivory grips (like General Patton did); it's hard to tell from movie stills because when he has his gun out he's holding it, of course. But apart from that difference, the agent is right. Rooster Monkburn's gun does indeed look like a real gun.

Except that it is two inches long.

Since the Single Action was about 10.5" long and fired a .45-caliber bullet weighing about 15 grams, I would hypothesize (translation: ain't doing the math) that the monkey-gun bullet would be about .08 inches in diameter and weighing maybe 2 grams, if the monkey gun came with bullets, which it doesn't, or was capable of firing them, which it isn't. All of which is to say that if a terrorist put it up to your neck, you would know whether it was real or not and whether to be worried. And you would then kick that terrorist's ass.

Ultimately, our heroic TSA agent decided not to call the police, and Ms. May at least got her other sewing supplies back, presumably including needles potentially more dangerous than the fake monkey-gun bullets the TSA pretended to confiscate.

Update: A reader (Mark Thorson) quickly noted that my math is wrong (which I realized shortly after hitting "post," or at least that's my story). I was just scaling it down in one dimension, but mass and weight are related to volume and so would actually go down by "the cube of the linear scale factor":

So however dumb you thought the TSA was based on my math, you should at least cube that.

Another Incident of Taco-Related Violence