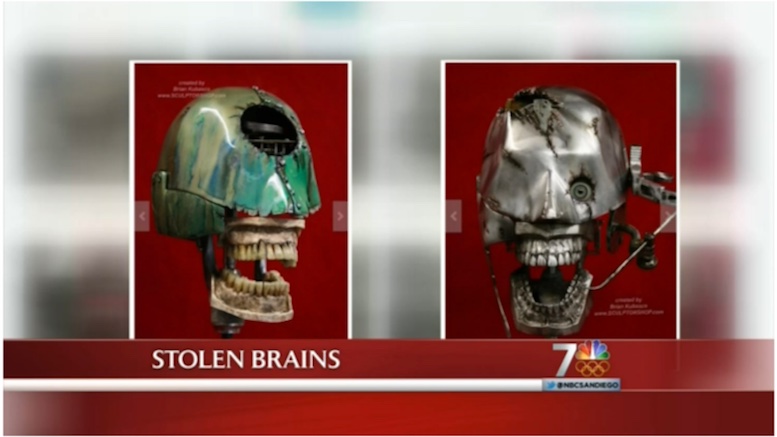 I’m not creeped out by many things, but “human body parts not currently attached to a human” is on my short list. And if I had to rank the items in that category, “head and/or brain” would be near the top, as some of my posts have suggested. See, e.g. “More Fun With Jeremy Bentham” (June 4, 2013) (discussing famous philosopher who had himself stuffed; head was once kidnapped by college students); see also “Everybody Here is ‘Oh My Gosh, You Got a Box of Heads‘” (Jan. 15, 2013) (somebody found 18 heads in a box at O’Hare and DHS was all like, not a big deal, happens a lot).

Brains are all over this story.

According to NBC 4 (southern California), a San Diego man was instrumental in solving what I will call The Case of Who Stole 66 Jars of Brain Tissue and Other Human Stuff From the Indiana Medical History Museum Last Year. Because somebody did that. Authorities there said someone broke into the museum one or more times between Sept. 7 and Oct. 16, 2013, and “several jars of human brain and other human tissues” were found to be missing. Detectives did not seem to have any leads, nor was the motive for stealing human brains immediately clear. Not the easiest thing to fence, probably, and it’s not like you’re going to just put them on eBay.

They put them on eBay.

And someone bought them.

That person was Brian Kubasco, who eventually called the museum “to report that he had purchased six jars of brain matter on eBay and, after carefully inspecting them, realized they belonged to the medical museum and were possibly stolen.” (According to the Indianapolis Star, the “careful inspection” entailed “noticing labels on the containers.”) Police were able to use this tip to track down the eBay seller, who turned out to be a middleman for the brain thief.

I, of course, immediately tried to find the relevant listing on eBay myself, but could not. Are there brains for sale on eBay? Yes. I was not too surprised to find Preserved Real Moose Brain and Preserved Real [Unspecified But Too Small to Be Human] Brain, although I am still wondering why the seller felt the need for an “expedited shipping option” (actually, I don’t want to know). There were also a few listings of what appeared to be real human brains, such as “Real Brain in Apothecary Jar!”—

But the details of those did not seem to match the description in the reports. I also found “Authentic Real Human Brain Section,” which did have a label but otherwise also didn’t match. It did come mounted in a nice pendant which would be a real conversation-ender.

eBay may have removed the listing by now, but the police found it, as well as the seller, an Indianapolis man named Austin Rector. He didn’t use his real name on eBay, but Kubasco had his cell-phone number. Rector quickly agreed to work with them to catch the brain burglar, who turned out to be David Charles. “Rector then called Charles to see if he had any more jars [full of brains] for sale. Charles said he didn’t and was concerned about trying to get more.” And who wouldn’t be, having learned of the lucrative online auction trade in old brains?

Happily, Charles decided to solve this brain-tissue deficit the same way he got it in the first place: by stealing it. Rector told police Charles was planning to go back to the museum on the night of Dec. 14/15, but a stakeout ended with no result. But later that morning, a burglar indeed struck again, and this time 60 jars of brains disappeared. (It’s all about supply and demand, my friends.) Rector later confirmed that this was Charles at work again, and cooperated in a sting operation.

This took place at Dairy Queen, the obvious place to buy and sell samples of human brains.

Charles and a friend were arrested with 20 jars of stolen brain tissue. Police found another 28 at the friend’s house. “All 48 jars of human brain matter were recovered,” it says, so either 60 jars was an estimate or there are 12 still unaccounted for. Charles has been charged with burglary, among other things.

So all the loose ends are tied up, except one—why was somebody buying human brains on eBay? The Star said only that Kubasco “likes to collect odd things,” but as the NBC 4 report made clear, there is more to that story: 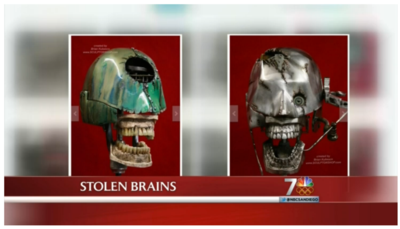 The stolen brains were not actually destined for these skulls (they probably would have been resold); these are just examples of the art of Brian Kubasco. Kubasco is an artist and sculptor (I just wrote “skulptor” by accident—or maybe I should say I just “trademarked” that word, because it’s awesome). He is “deeply interested in ‘steampunk,'” which NBC 4 defined not-quite-accurately as “a futuristic sub-genre of science fiction focused on antiquated steam energy,” and uses medical samples he finds on eBay to create custom art pieces like those above. Those, however, don’t include brains or even real skulls; Kobasco said they are vintage “dental phantoms,” or models on which dental students practice. He has a “vast collection” of these, he said, some of which he tricks out and sells to clients, most of whom are doctors or psychiatrists. So you see, there was a perfectly normal explanation for all this.

I like weird stuff too, but I have to say I really hope no psychiatrists are keeping these things in their offices. That probably would not go well at all.

Scalia: Equal Protection for Ladies? Nobody Voted for That