That's how Richard Masten felt on Friday, according to Ari Odzer of NBC6 in South Florida. And that's why, as you can see, Masten did indeed eat a document in defiance of a judge's order to turn it over. 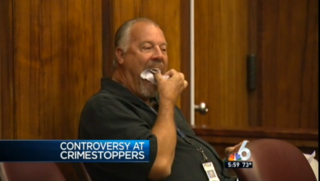 Masten, a former police chief, is now the executive director of Miami-Dade Crime Stoppers, which collects thousands of anonymous tips every year in an effort to help law enforcement. According to the report, Masten was ordered by a judge to turn over this particular tip after it was requested by a defendant's attorney. He wasn't required to turn over the source's name, but apparently felt that it would be too easy for the defendant to figure out who the source was based on the information in the tip.

So down it went. 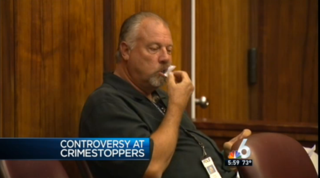 Masten said he ate the document out of a sense of obligation to the Crime Stoppers project and those who contribute to it:

"We promise the people who give us information to solve murders, serious violent crimes in this community, that they can call with an assurance that they will remain anonymous and that nothing about them or their information would ever be compromised," [Masten] said. "The case today started creeping into that… it’s not going to happen on my watch and I understood the consequences."

Of course, most evidence-eaters do it to protect themselves, but here even the defense attorney conceded that Masten was doing something he believed to be noble. He might have jumped the gun a little, though, because the judge might have been willing and able to come up with something that would protect the source's identity while still allowing the accused to defend herself. His consumption of the document deprived her of the ability to do that.

At least temporarily. As I mentioned back in 2007 after a legislator ate a bill in an effort to stop it from passing, this kind of thing is a meaningful gesture but its effectiveness depends on whether there's another copy, and there typically is. Here the information is presumably in Crime Stoppers' files, and so unless it is willing to purge that, too, eating the physical document is only a temporary measure. And doing it in defiance of a court order is, unfortunately, contempt of court.

Masten will be back in court next week to learn what the penalty will be. He reportedly could get up to two weeks in jail, but he said he was prepared for that. "I'll bring a toothbrush and some pajamas," he said.

Via the excellent @_FloridaMan Twitter feed, although the Florida man in this particular case was not up to the kind of shenanigans normally being reported there.

CNN: Michael Jackson: Does Anyone Care?

Minnesota Charges Wife With Having Sex With Husband