The New York Times reported on March 10 that the Florida Legislature may abolish the town of Hampton, a one-square-mile craphole northeast of Gainesville that until now was known, if at all, only for being one of the nation's worst speed traps. State officials started a criminal investigation after an audit of the town's government "uncovered reams of financial irregularities, shoddy record-keeping and missing funds."

The state representative for the area ordered the audit, which he said was not in any way related to the fact that he got a speeding ticket there in 2011.

Hampton has existed, for whatever reason, since about 1925. Home to fewer than 500 people, it is located east of Highway 301 in north-central Florida. Some would say, actually, that it is located on Highway 301, as a result of an amendment to the town's borders in the mid-1990s. See if you can spot the amendment on the map below: 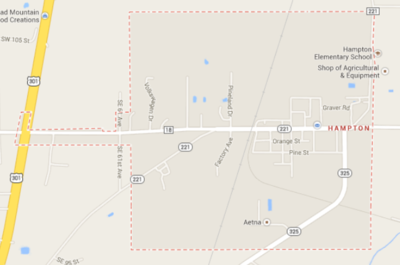 Hint: it is on the west side of town.

There is no question (not that you questioned it) that the town extruded this tentacle for the sole purpose of picking travelers' pockets: the NYT article says that a former mayor admitted helping to arrange the annexation "to help fill city coffers." The speed limit coincidentally dips from 65 to 55 when the highway enters that .2-mile "part of town," making "criminals" out of people who don't notice the change. A lot of people. According to the Times, during 2011 and 2012 alone the town's officers wrote 12,698 tickets, an average of 17 people every day who regretted the 12 seconds or so they spent transiting West Hampton. The town took in $419,624 in fines during that time, but still operated at a deficit.

Photo by Edward Linsmier for the NYT

Where'd all that money go? This guy might know where some of it went. He's the most recent mayor, and he's wearing an orange jumpsuit for a reason (drug charges). The town's three staff members resigned in February, and so has the police chief, who at one point was employing 17 officers ("a word loosely applied here," said the Times) for a town of 477 people. The county sheriff said he did not know how many of the 17 were actually police officers or whether any of them were actually trained in radar detection. The chief is one of the investigation's primary targets, according to the report.

The investigation also involves water, which is the one utility controlled by town government. Not only did it do a poor job of supplying water, the utility's financial records evidently left something to be desired. "The reason … that no water meter logbooks before April 2012 could be found," the Times reported, "was that they were 'lost in a swamp,' the result of a car accident involving the water utility operator." (He forgot to file an accident report, it turns out, probably due to swamp trauma.) According to the sheriff, some residents said they were threatened with having their water turned off if they made trouble.

The town apparently has about 30 days to come up with a plan, or else the legislature is likely to dissolve it, which would make it part of surrounding Bradford County. That would presumably take care of the speed-trap tentacle, which is currently non-functional anyway due to lack of police "officers" to staff it.

"We are just trying to fix things that happened," said one of the five city councilmen, ironically (or not) named "Frantz Innocent." (Nobody's really to blame, you see—once again it's the fault of these things that keep happening. When will someone do something about the things?! They are getting away with murder.) "If you want to go poking around looking for something," Mr. Innocent continued, "you can always find something wrong." (It's the pokers' fault, too.)