I previously mentioned the ABA Journal's "Peeps in Law" diorama contest, but now all the entries are in and the voting is underway.

Clearly the best entry this year was "The Emergency Peepsquatch Ordinance," by Lee Rawles: 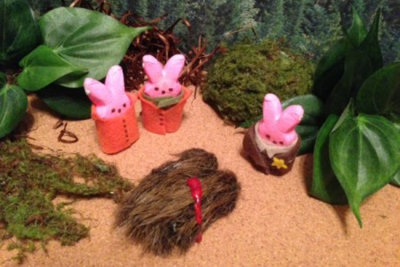 Unfortunately for these two hunters, in 1969 Skamania County, Wash., made the "premeditated, willful and wanton slaying" of a sasquatch, yeti, bigfoot or "Giant Hairy Ape" a felony punishable by a $10,000 fine and up to five years in prison.

It's not one of the eight finalists, which can only mean it was disqualified because (1) Lee is an ABA employee (she interviewed me for her Modern Law Library podcast); (2) the ABA published my book, and (3) the final eight are selected by the ABA Journal's editors, not by popular vote. Another triumph ruined by conflict-of-interest rules.

There are a lot of good ones, though. I'm going with the highly elaborate and charmingly ghoulish "Constitutional Crisis" (currently in the lead anyway), which involves no fewer than three separate sub-dioramas depicting the Kennedy assassination and its aftermath. 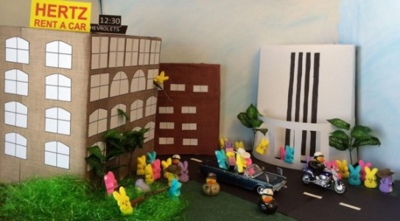 The voting is open until April 21.