Turns out you left it in Volusia County, Florida, or one of your accomplices did, anyway: 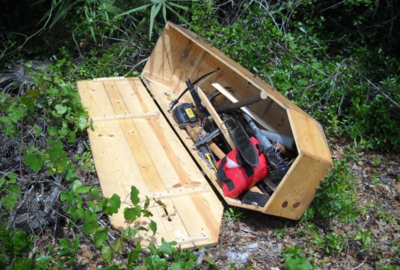 Head down there anytime to pick it up, although the local sheriff's department would like to speak with you when you do. Just need to finish up some paperwork, really. Come by anytime.

News13 reports that last Thursday, an officer of the state Fish and Wildlife Service found a coffin upside down in a wooded area near De Leon Springs (about half an hour west of Daytona Beach). He called the police, because that's what you do when you have found a coffin upside down in a wooded area, though I personally would suggest you do that only after running several miles away while screaming the loudest possible prayers to the deity or deities of your choice. (Note: the screaming of prayers is optional but recommended; also recommended, if you are with me at the time, is not getting between me and wherever I am fleeing to.) A deputy arrived and torched it with a flamethrower, just to be safe.

No, he turned it over and opened it, to find … not a body, but something almost as disturbing—46 weapons and other items, including nunchucks, a crossbow, axes, hooks, chains, a boat anchor, two sickles, and a "ball with metal spikes." The report notes that he did not observe blood, hair "or anything that would indicate foul play." Nope, just a few dozen medieval weapons in a coffin somebody dumped in the woods. Nothing to see here, folks.

To be fair, it isn't "foul play" to possess any of these weapons—or all of them—in Florida, although carrying the smaller ones as concealed weapons would probably violate this law. A couple of states do prohibit certain martial-arts-type weapons entirely, notably the nunchaku, although such a ban is most likely unconstitutional. See "New York Attorney Will Fight Nunchaku Intolerance," Lowering the Bar (Feb. 8, 2007). Having checked up on the New York case just now, I didn't give that guy enough credit, because his case in fact reached the U.S. Supreme Court, and the Court vacated the judgment against him and remanded after its Second Amendment ruling in McDonald v. Chicago. A motion for summary judgment is pending in the remanded case.

It is also not illegal to store sickles in a coffin, but come on, man.