My first thought was, “wow, the human race really is not evolving at all,” and then I thought, “you know, it’s laws like these that are partly to blame for that.”

Back in the day, of course, human beings who thought it would be neat to hug or pet or maybe try to ride on a tiger, or any enormous carnivore, really, were swiftly removed from the gene pool, most likely well before they had a chance to breed more humans of that ilk. I assume, in fact, that scientists have proven that this exact scenario, repeated many thousands of times, is how we got to where we are today in the first place. After a while we sent the remaining dumbasses off to bunk with the Neanderthals, and away we went.

But today, these encounters mostly take place at circuses, county fairs, petting zoos, or as part of some other sort of exhibition in which the animal is somehow restrained or tranquilized in order to make it less likely to, let’s say, devour someone who comes near it. These unfortunate restrictions on the animal have encouraged a trend that I have just now learned about (thanks to Tom and to the New York Post), one in which men have pictures taken of themselves snuggling with a tiger so that they can use said pictures in their dating profiles. 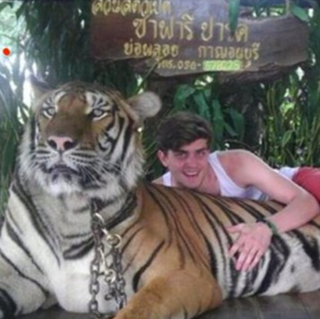 Yeah, come give “Kitty” a kiss for the next picture, dork. I promise you that one’ll go viral.

This has become sufficiently common that there’s an entire blog (or tumblr, anyway) devoted to it.

Any New York gentlemen wanting to get in on this should do so while they still can, because the legislature is on the verge of passing a bill that would make the practice of tiger selfies illegal. It does not use that term, nor is it limited to tigers, but that’s the gist of it: The law would make it illegal for any person required to have a license under the federal Animal Welfare Act “to knowingly allow the public to have direct contact with a big cat.”

“Big cat” is defined to mean any species of lion, tiger, leopard (except for clouded leopards), jaguar, mountain lion, or any hybrid of these; “direct contact” means “physical contact or proximity where physical contact is possible, including, but not limited to, allowing a photograph to be taken without a permanent physical barrier” between human and animal. Violating the law would result in a fine of $500 for a first offense or $1000 after that.

This is entirely the wrong approach.

I think we need to do one of two things: (1) make it illegal to cart these mostly rare and once dignified animals around at all; or (2) continue to allow it but only as long as the animals are kept alert, well armed, and slightly underfed.

Think about it. These people are using the pictures in dating profiles. This is exactly the situation in which the individual should either be proven fit by having successfully taken a selfie with a fully alert deadly predator through great strength, speed, and/or cunning; or else prevented from mating entirely by being eaten first. The race can start its slow upward trek again, animals get some of their dignity back, and we’ll save tons of money on tiger feed. Also, think of the ratings.

Yes, I suppose women could achieve the same result by simply not mating with anyone who has a tiger selfie for his profile. They could. But I still think legislation is a good idea.

Update: as reader Justin points out, these are not technically “selfies”—or at least the one above is not, as a “selfie” is by definition a picture taken of oneself. I should not have aped the NY Post in using that term, especially since, now that I think about it, “New York to Ban Tiger Snuggling” (or “Tiger-Snuggling Portraits”) seems better anyway. I’m going to leave it, though, because in fact the law does ban tiger selfies, it just goes beyond that to reach other kinds of man-tiger portrait interactions as well. I just wanted to clarify that detail.

How South Korean Legislators Spend Their Time When Not Brawling

UPDATE: Joe Francis No Longer Permitted to Represent Himself

The Verdict is In: Juror Wanted to Go to Jackson Memorial