You may have heard that "the Rain City Superhero Movement is over," as its leader Phoenix Jones announced the other day in Seattle (KING5 News; thanks, Mark). But the news is not quite that dire. Turns out that RCSM will be re-forming, if it hasn't already, it's just that only five of the current members will be included in the "new" group.

Basically, Phoenix is too kind-hearted to fire anybody, so he just dissolved the organization and re-created it with a more limited membership. 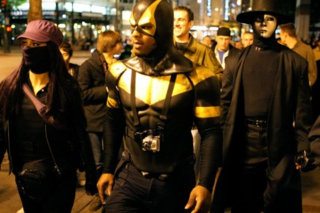 Why did some of the superheroes need to be fired re-incorporated away from? A variety of reasons. According to the report, the movement had grown dramatically (is there another way a superhero movement could grow?), but this led to a certain decline in quality. Some members did not always cooperate with police. Some carried illegal weapons, breaking a rule that Jones said is "non-negotiable."

Some apparently could not do five pull-ups.

Jones says isn't opposed to welcoming old members back into the fold, but they must meet his requirements for superhero activism, like 5 pull-ups and 25 sit-ups in two minutes.

He didn't call anyone out by name, so we don't know whether it was, for example, Catastrophe, Lil Rambo, or Purple Reign who couldn't hack it. It wasn't Omega, because according to the report he's on the new team. (By the way, "Penelope" and "Michael Taufner," those aren't superhero names, they're just names.) Even though these guys are mostly just observing and documenting, it does seem like 5 pull-ups and 25 sit-ups in two minutes is probably a reasonable minimum for someone purporting to be part of a superhero team. I suppose if you could fly or shoot laser beams out of your eyes, those would be acceptable substitutes, but if your only power is being able to move your limbs in dramatic ways, those limbs should be relatively strong.

Needless to say, RCSM's nemesis, Rex Velvet, has been gloating nonstop ever since Jones's announcement. But again, RCSM is not actually disbanding, just getting leaner (on average) and possibly meaner. Besides, how many pull-ups can you do, Velvet?

That's what I thought.