Is it worth doing jail time to become a legendary tagger at the ripe old age of 18? Francisco Canseco is probably about to find out.

"Tagging" is sometimes used to mean "graffiti" in general, but more specifically refers to a form of graffiti in which the person identifies himself or herself by writing a personal "tag." While a tagger doesn't use a real name, obviously the tag is associated with an individual and so once the association becomes known to authorities, continued use of the tag may be risky.

I suppose if you tag the inside of a courtroom while waiting for a hearing on 31 counts of vandalism based on your prior use of that same tag, you probably don't care much about that risk.

According to the San Diego Union-Tribune, Canseco was at a downtown courthouse on April 24 awaiting just such a hearing when he used a paint pen to tag benches in the hallway and on the backs of chairs in the courtroom itself. A detective was quoted as saying that Canseco "wrote it while he was waiting," and if true then he somehow got through the hearing itself without anyone noticing, or at least without anyone recognizing the tag. The report says that the "fresh graffiti" was only noticed the next day.

Turns out there is a web service called Graffiti Tracker that, according to its website, "provides clients with GPS-enabled digital cameras to use to photograph incidents of graffiti," which are then uploaded and reviewed by "trained analysts." Presumably court records are used to associate tags with particular taggers or groups, though it's not clear from the website. The service says it's primarily used by law enforcement and public-works agencies, and claims to have analyzed over 4 million photos, helped in the arrest of 3,733 people, and helped collect over $8.2 million in restitution (about $2215 per arrestee). 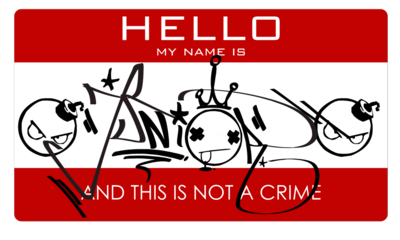 Well, not if it's just a name tag
(Picture by ChAbO93)

I suppose Graffiti Tracker evidence would be admissible, depending on the reliability of the process and assuming there were valid expert testimony supporting that. It was apparently considered good enough to provide probable cause for a warrant to search Canseco's home, where deputies allegedly found Canseco's tag tagged all over the place. They also found "graffiti paraphernalia," though the report wasn't specific. Seems like anything you can write with might qualify as "graffiti paraphernalia."

And, in fact, it is illegal in California just to possess a felt-tip marker "or any other marking substance" (among other things) "with the intent to commit vandalism or graffiti." While the breadth of that might be troubling in other circumstances, here the suspect's tag appeared inside a courtroom in which the tagging suspect is known to have been awaiting a hearing on tagging charges (a hearing to which he brought a paint pen), and said courtroom is almost certainly subject to video surveillance that actually shows the suspect doing the tagging. So this one does not especially trouble me.

While the previous 31 counts were misdemeanors, the five new ones are said to be felonies on the grounds that the damage cost more than $400 to repair. Probably the charging decision was influenced by the fact that he tagged a courtroom, but I'm just guessing.

Canseco pleaded not guilty to the new charges on Monday. Apparently he didn't tag anything else while he was there.

How They Filibuster in Taiwan