In the draft of its new “Compendium,” the U.S. Copyright Office has stated that it will not register works created by animals. The “human authorship” requirement isn’t new, but the specific example of “[a] photograph taken by a monkey” is: 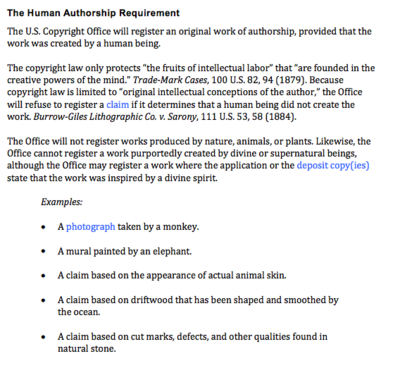 Okay, but as we have discussed (see, e.g., here)  this doesn’t settle anything.

First, this is talking about registration, but registration isn’t necessary in order to have a copyright. That exists as soon as you create something original and (for example) write it down or record it or whatever. As a practical matter, you need to register the copyright in order to defend it legally, but that’s a different concept.

Second, in the “monkey selfie” case there is still a question whether “the work was created by a human being.” Remember, the photographer traveled to Indonesia, set up his camera, etc., and the monkey just hit the button. The monkey, sadly, doesn’t have any rights, but the photographer still has an argument that he “created” the work, at least in part, because he set up the conditions for it.

As some of you pointed out, National Geographic Magazine has published lots of photos taken by automatic cameras that someone set up in the jungle (or wherever animals live, I’m not a zoologist) and an animal then triggered somehow. In many cases there would have been no other way to get such a photo. How is that different from this situation? Or is it? Are all of National Geographic’s automatic photos now in the public domain?

I doubt it. I still think the photographer may have some rights here, monkey notwithstanding.

I asked National Geographic about this, but perhaps wisely, they declined to comment at this time.

Man Wants Money Back for MiG-21 Bought on eBay

Defendant Votes on His Own Indictment

Retraction of the Millennium