Last Friday, Dennis Hawver argued to the Kansas Supreme Court that he should not be disbarred for his representation of Phillip Cheatham in a 2005 trial. As you may suspect, that trial that did not go well for the defense. Certainly, the fact that the defendant was sentenced to death, as well as several lengthy prison terms just in case, itself says nothing at all about the skill of the defense attorney. An attorney may provide entirely competent or even the best possible representation and yet the client may still lose. In fact, this happens to someone in pretty much every case. It’s an adversary system. One side or the other is normally going to lose, but almost always both sides have received at least competent representation.

This was not one of those cases.

I can’t find a transcript of the hearing, but it turns out the Kansas Supreme Court posts oral arguments on YouTube, so I took some notes. The state’s disciplinary administrator, Alexander Walczak, who should not be listened to while driving, argued first. He noted that a hearing panel reviewing Hawver’s performance “found 24 specific instances of deficiencies,” ranging from procedural errors to a failure to investigate possible defenses.

And “[o]ne of the most basic [deficiencies],” Walczak noted, “was that he really had no idea of the law of capital murder.”

Hey, neither do I. But this seems like it’d be more of a problem if one had actually agreed to represent a defendant charged with capital murder. Cheatham was charged with two.

Based on Walczak’s argument, it’s not clear what Hawver did right. Hawver did not know how to conduct “capital murder trial proceedings,” Walczak said, he “was not aware how to … death-qualify a jury during voir dire,” he did not know the difference between the guilt and sentencing phase of capital murder proceedings and in fact “had no idea there was a [separate] sentencing phase.” Hawver allegedly conducted very little investigation, and although he did turn up a potential alibi defense he then failed to assert it. As a bonus, he apparently introduced evidence that his client had a prior criminal conviction even though the State had conceded that was not admissible.

About the only thing he did not do wrong at trial, apparently, was dress up like Thomas Jefferson and bang on the lectern.

He made up for that last Friday, though. 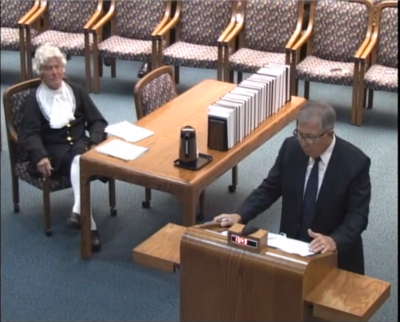 Declaring his independence from the Bar

According to the Topeka Capital-Journal, Hawver is wont to dress up like our third president for official events, or at least he did so for campaign events when he was running for Congress and/or the governor’s mansion back in the 2000s. It is not clear whether he’s done this before in court, but he definitely went full patriot last week.

“I appear before you today,” he began, “dressed as Thomas Jefferson, who is my hero among the Founders. And I wore this outfit, because today, the issue before you is whether or not the Constitution of the United States, as interpreted by the United States Supreme Court, has bearing on our rights.”

That wasn’t the issue.

The main issue was whether Hawver violated Rule 1.1, requiring basic competence. He wanted to focus on the guilt phase (“I don’t remember that much about the penalty phase,” he admitted), but the justices didn’t. “Your client didn’t instruct you,” one asked, “to tell the jury in the penalty phase—the jury that had just convicted Mr. Cheatham beyond a reasonable doubt of two homicides—he didn’t tell you to tell the jury that whoever killed these people should get the death penalty,” did he? “No,” Hawver admitted, “that was my idea.” He believes his client is innocent, you see. Which is fine—it could even be true—but this is just not a great penalty-phase argument.

It appears, though, that failure to assert the alibi defense is the main incompetency charged—there may be some evidence that Cheatham was in Chicago at the time of the killings, and cell phone records are one way to establish whereabouts. “If I had known” that cell phones had this capability, Hawver said, “I’d have been on it like a dog on a bone!” Alas, he didn’t. But he probably should have.

For a while I was thinking that Hawver has been deliberately trying to set up an ineffective-assistance-of-counsel defense. “If you had to accuse me of incompetence to get Philip Cheatham a new trial, I’ll take it!” he said at one point Friday. In fact, he declared, banging the lectern, “I am incompetent!” He continued, “[a]nybody who believes they are representing an innocent person and can’t convince the jury … is incompetent, or ineffective, at least.” That’s not true at all, so he didn’t even make a competent incompetency argument.

So now I don’t think he’s faking. First, if he had been, he could have stopped being ineffective now because Cheatham is already getting a new trial. Second, he hasn’t stopped. Exhibit A: Jefferson. Exhibit B: see above. Exhibit C: the argument in favor of his client’s innocence that he made at trial and dusted off again last week: “With this man’s background and experience, do you think he would have left an eyewitness alive?”

Just in case the Jeffersonian strategy fails, Hawver also filed a federal lawsuit against the court seeking damages and an order precluding it from disbarring him. (“I think you got my lawsuit,” he said at one point during his argument.) That won’t work, either.

Carjacker in Jesus Cape Believed to Be “Religious Nut”

Emergence of an Artist (from a Lawyer)