Above the Law reports that someone, or multiple someones, sent it a copy of a confidentiality agreement that one member of a law-school study group apparently proposed to the others. Why does a study group need a confidentiality agreement? Well, it doesn't, but one who thought it did might reason that the group is agreeing to pool its resources for the purpose of getting better grades, and if the fruits of this endeavor are shared outside the group, then others' grades may also be raised, thus defeating the purpose.

Even if you buy that, though, this person does not even trust the members of his own study group, at least not without a written confidentiality agreement including a liquidated-damages clause (!). He's probably thinking that he was right about that, because at least one member of said group immediately disclosed his nondisclosure agreement to the world at large.

Each Study Group member hereby agrees that at all times during their participation in the Study Group thereafter, to hold this in the strictest confidence, and to not disclose confidential information as defined herein to anyone who is not also a current member of the study group, without unanimous agreement, memorialized in writing, from the other Study Group members.

According to ATL, this person is a 1L, meaning he or she (but I'm thinking "he") has only just started law school, and yet his writing already sucks. I think people generally start out as pretty good writers and probably improve during the first year, when students actually get some training in it, and the long decline in legalese doesn't start until year two. This person wanted to get a headstart, I guess. To be fair, it's probably just that whoever he copied this from (and he did cut and paste at least part of it from somewhere, which is a little ironic) sucked to begin with. 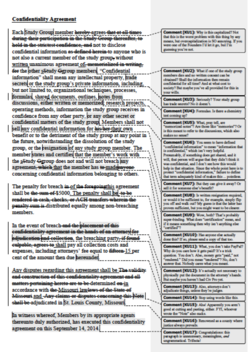 Not just "confidence," but "strictest confidence." That's stricter than regular confidence, obviously. And not just "written agreement," but an "agreement memorialized in writing"! Much more impressive!

That's just the first paragraph. I actually had quite a few comments, as you can see. (Click for the PDF, if interested.) I also, for whatever reason, went through the exercise of trying to come up with a revised version that might do what I think this person wanted to do, assuming he could actually find anybody who wanted to do it with him. That looks like this (and if anyone out there actually tries to use it, I will punch you):

For purposes of this agreement, “confidential information” shall mean any notes, outlines, or other study materials created by a study group member from the date of this agreement until the member leaves the group.

The penalty for breach of this agreement shall be $5000, to be distributed equally among the non-breaching members. If litigation is necessary to enforce this agreement, the prevailing party shall be entitled to recover attorneys’ fees (not to exceed 15 percent of the amount due) and reasonable litigation costs.

If necessary, the agreement shall be construed in accordance with Missouri law and any disputes regarding it shall be adjudicated in St. Louis County, Missouri.

I'm sure there are problems with that, too, but it sucks less if only because it's shorter. It is equally stupid, fundamentally.

The main thing, of course, is that while we need written agreements sometimes, we don't need them at this level of everyday life (even in law school). As Joe said at ATL, "this is a torts exam, not a race to map the human genome," and that seems about right.

Update: Doug the Reader points out that there is a potentially quite significant problem that both versions arguably overlook:

The way the confidentiality agreement is written—including your version—using the notes and information shared in Study Group (henceforth SG) to ace a test is punishable by $5000. Arguably, $5000 per test answer! After all, it is "disclosing confidential information"—the correct answers—to someone not in the SG—the professor.

Hm, that could be a dilemma.

Although it might be such a dilemma that it would ultimately rescue any bonehead who actually signed one of these things. Such a person could argue that the agreement can't be construed this way because prohibiting ultimate disclosure to professors would defeat the whole purpose of the agreement. That can't be what the parties intended.

Also, my version avoids this problem (though I admit I didn't think of it) because it defines "confidential information" as any "notes, outlines, or other study materials" that an SG member creates, not the actual information underlying those materials. Nobody would just copy their study materials straight onto the exam—right?—so anybody who used my version would probably be fine. Except that I am still going to come over and punch you.

To which you implicitly agreed by using my version in the first place, so I'm covered there too.

This is great, though—you guys are thinking of even more different ways in which things can potentially be stupid. This can only be a good thing. I mean, at some point, you will have to do this without me.