Well, that headline isn't entirely accurate. You paid dozens of Nazis and you're still paying at least four of them.

According to the Associated Press, "[d]ozens of suspected Nazi war criminals and SS guards collected millions of dollars in U.S. Social Security benefits after being forced out of the United States," due to a "loophole" that the Justice Department used to pressure them to leave. That is, rather than prosecuting or even deporting them, the government told them that if they left voluntarily, they could keep getting Social Security checks. The AP identified at least 38 suspects who took this deal over the years, and found that "there are at least four living beneficiaries."

I should say that I have no idea how strong the evidence was or is against any of these people. The fact that a government (let alone ours) accuses someone of a crime certainly doesn't make them guilty, and the AP report describes them all generally as "suspects." But it doesn't equivocate when referring to specific people, including "Martin Hartmann, a former SS guard" at Sachsenhausen, and Jakob Denzinger, who "patrolled the grounds" at Auschwitz. While "patrolled the grounds" sounds like maybe he was just going around picking up cigarette butts, I assume it's a figure of speech for "was an SS guard."

If so, you are paying for the retirement of someone who was an SS guard at Auschwitz.

In fact, you are paying for him to live in what the AP says is "a spacious apartment" in Osijek, Croatia. The AP didn't get inside, apparently, but provided this picture of him peeking out of it: 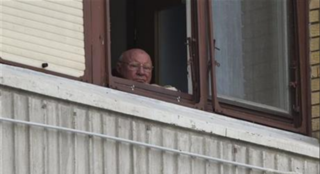 Thanks for the cash, America!
(Photo: AP/Darko Bandic)

The AP says it was able to reach Denzinger for comment, although it didn't say whether this picture shows how it did that. Regardless, he did not wish to discuss the matter.

Both Denzinger and Hartmann took the deal and fled after learning they were going to lose their U.S. citizenship. The practice was apparently meant to "skirt lengthy deportation hearings" and "increase[] the number of Nazis" expelled, although it's not clear to me why the feds couldn't have done something like, let's say, choose to prosecute these guys instead of marijuana users or dealers, if they were short of resources. [See below.] And these justifications also seem to have been hotly disputed by other parts of the government, including the Social Security Administration and the State Department, which noted that our allies were not too pleased with "the practice known as 'Nazi dumping.'" The report says we stopped dumping Nazis, but kept paying them.

A DOJ spokesman told the AP that the payments "never were employed to persuade Nazi suspects to depart voluntarily," which flatly contradicts what the AP says it learned from interviews and a review of government records. I don't know about you, but I'm always ready to believe a DOJ spokesperson in situations like this one. I mean, the place has "Justice" right in the name.

The report also quotes Rabbi Marvin Hier, head of the Simon Weisenthal Center in Los Angeles, as being pretty upset that "we, in effect, were rewarding" suspected Nazi war criminals by sending them off to Europe with a promise of American dollars (which were worth more in the past, of course). Is it ironic that even the tiniest part of Rabbi Hier's taxes have been and are being used to support former SS concentration-camp guards in their golden years?

I just looked up "irony" again to be sure and the answer is yes.

Update: A reader points out (thanks, David) that the U.S. likely had no jurisdiction to actually prosecute these people anyway because they committed the crimes outside the U.S. and neither they nor their victims were Americans at the time. (The laws are different now, but may not be that much better.) Deporting them to a country that did have jurisdiction was arguably the next best thing, although obviously some of them ended up in places like Croatia that did not exactly have Nazi prosecutions at the top of the to-do list. Also, at least theoretically Denzinger is getting his own money back out of the Social Security program, not getting our tax dollars, or at least I think that's how it works. So this may be a tougher call than it first appeared.

Justice Scalia and the Genetic Panopticon