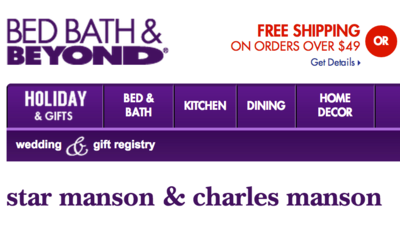 As I'm sure you know by now, or if not I'm telling you, Charles Manson and Afton Elaine Burton were issued a marriage license on November 7. The bride is an attractive 26-year-old who hails from the Midwest, while the groom is a not-at-all-attractive 80-year-old currently residing in Corcoran, California, where he is serving a life sentence for several notoriously brutal murders. No date has been set for the nuptials, but the prison has assigned a wedding coordinator, and the license is good until February.

And they do appear to be registered at Bed Bath & Beyond.

Are these actually the same Mansons (or future Mansons)? The event date is given as Sept. 21, 2014, which is obviously wrong. But the Associated Press reports that "Burton goes by the name 'Star.'" And that is good enough for me to conclude that what we have here is in fact a wedding gift registry for Charles Manson and his unblushing bride, or at least a test run.

At the moment, no gifts have been purchased, so it's wide open for you. I actually don't see a knife set on the list, but please don't get them the flatware, or the fondue forks, or even the grapefruit spoons, which I bet Charlie could sharpen pretty handily.

Update: Several people have mentioned the great Simpsons episode that featured a gun store called "Blood Bath & Beyond" (Homer: "Three days? But I'm mad now!"). Originally I was going to mention that here, but then I decided to actually check some registries, just in case. The fact that I got lucky on just my third try (came up empty at Pottery Barn and Williams-Sonoma) I credit to my colleague Amy, who happened to email me yesterday. "Hey," I asked her, "if Charles Manson were getting married, where do you think they'd be registered?" (She is unfazed by such questions, especially from me.) "They seem like Bed Bath & Beyond people to me," she responded.

I don't really know what that means exactly, but she was right.