I was a little flummoxed when I saw this caption. I thought, “That can’t be right. Someone at Westlaw must have been screwing around.” But … there it is. It’s beautiful in its simplicity. 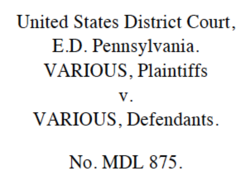 It’s the all-purpose caption! Think of the ink we’d save.

Unfortunately, we do need a way to distinguish between cases. Each one does get a unique number, but it’s just too dull to go around saying things like “the long-awaited Supreme Court ruling in Case No. 2009-cv-42513-JRN-ERC.” So not only is it ancient tradition to name them after the parties, the rules usually require it. Federal Rule 10(a), for example, says that every pleading has to have a caption with certain information in it; “the title of the complaint must name all the parties,” and later pleadings have to name at least the first party on each side.” So what’s the deal here?

First, this was an MDL (Multi-District Litigation), which means similar federal cases from multiple states have been consolidated in one court. So there were lots of cases and complaints involved, and you gotta call it something. But usually these cases are called something like “In re BP Oil Spill Litigation,” not Various Plaintiffs v. Various Defendants. I found only a handful of cases with the latter name, most of them in this same court. And you know what? A court can pretty much call a case whatever it wants.

Second, though, it does look like somebody at Westlaw was screwing around, or maybe screwing up, because this case technically isn’t captioned Various Plaintiffs v. Various Defendants; it’s just Various v. Various. I guess that conveys the same amount of information, though, to be honest.

As noted above, I of course immediately ran a search for U.S. cases with “Various” in the name, and turned up a couple hundred or so. Most of them are in the already comical in rem category, meaning they involve property and we pretend the things are “parties.” Lots of these involved “Various Obscene Articles,” but there were a few I thought were candidates for the Comical Case Names list:

Yes, it kind of ruins it to find out that “Randy” was his last name, but at first glance that’s pretty good.

A few “various” cases were explained by a social-media company called “Various, Inc.” (One of those cases was brought by our old friend Beverly Stayart, who has a history of suing search-engine companies to complain about what comes up when she searches for her own name.) There’s also apparently a “Various Markets” in New York somewhere.

Finally, there was a case called Various Tort Claimants v. Father M., which doesn’t sound good at all. I probably shouldn’t have looked up Randy’s case, and that one probably isn’t getting any funnier, either.

The Defendant Seems to Have Left, Your Honor