And yet he remains an idiot.

Not literally, of course—I’m using “idiot” as shorthand here for someone who is apparently so out of touch with reality or lacking in perspective that he would declare legal war on a local Chinese restaurant that overcharged him by four dollars.

The target of Edelman’s wrath admitted that the website prices were out of date and quickly agreed to honor them, update the website, and refund the overcharge. End of problem? Well, of course not. Because as Edelman pointed out, that alone would represent “an exceptionally light sanction” for this heinous misconduct: 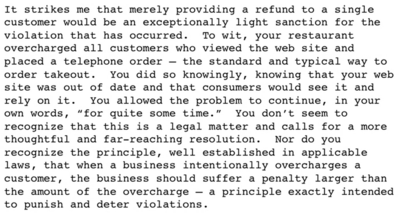 Rather than immediately complying with this mandate, the potential defendant made the mistake(s) of denying any fraudulent intent and wondering whether the matter was really “worth your time.” This only irritated our hero, causing him to increase his settlement demand dramatically. 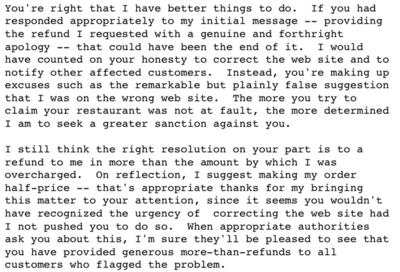 The order had totaled $53.35, so the half-price demand was about twice the former one. Edelman appeared to consider the enhanced sanction more appropriate for one who dares to deny his own malfeasance and/or question an attorney’s use of his time.

Edelman told Boston.com that he doesn’t do this kind of thing every day, but this seemed like a situation that “call[ed] for legal redress,” as he put it. “I mostly look for malfeasance by larger companies,” said Edelman, who appears to actually use terms like “malfeasance” in conversation, as if “legal redress” and “to wit” weren’t bad enough. Harvard is great, but at least one of its graduates really needs to lighten up.

It is not yet clear whether the “authorities” Edelman alerted will take action, or whether he himself will sue. It is in fact a potential violation to advertise something at one price and then sell it at another. He’s got that right. What he doesn’t have is an understanding that every human dispute need not be settled via the legal system.

“I count myself fortunate to live in a state that deems [this heinous] practice unlawful,” Edelman told the miscreant. Whether the state’s other inhabitants count themselves fortunate that he lives there is another question.

Update: On Wednesday Edelman apologized for how he handled this interaction, and it wasn’t a passive-voice “mistakes were made” or the “I’m sorry if anyone was offended” sort of apology, either. “[I]t’s clear that I was very much out of line,” he said in a statement. “I aspire to act with great respect and humility in dealing with others, no matter what the situation. Clearly I failed to do so. I am sorry, and I intend to do better in the future. I have reached out to Ran [Duan, the recipient] and will apologize to him personally as well.” So he should get some credit for that.

And he needs the credit, because as Boston.com also reported yesterday, he’s done this kind of thing before. If there was an apology in that case, the article doesn’t mention it.

Nobody Tells This Wookiee What to Do