In covering some of these stories, I sometimes wonder whether I am potentially helping to deter future conduct of that kind or possibly just encouraging it. It depends a lot on what the particular conduct is, of course. I would like to think that in a small way I may have tended to discourage people from, for example, forming an Amish beard-cutting gang, suspending schoolchildren for biting a danish into the shape of a handgun, trying to mug someone anywhere near a ninja-training school, taking the TSA at all seriously, or maybe pretending to have a brain injury in order to trick home-care workers into changing your diaper. On the other hand, I may have helped encourage attorneys to wear socks in court.

But if I do wonder that, I quickly remember that this is a legal-humor blog and that changing the world is not going to be its primary focus.

I do have a lot of readers in New Zealand, but I have no idea whether Adam Kelliher is one of them. Or, if he is, whether he read about Francisco Canseco, the 18-year-old graffiti artist/tagger who last year allegedly tagged a courtroom in which he was about to face a judge for 31 previous tagging charges. See "Tagger Arrested for Tagging Courtroom While Awaiting Prosecution for Tagging" (June 19, 2014). If he is and he did, he either was undeterred or thought that was pretty cool and decided to do something similar himself. 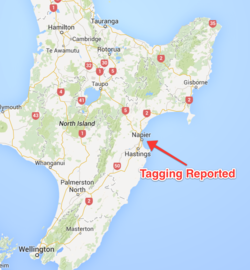 According to the report, the courthouse that Kelliher decided to tag, in Napier on the North Island, is inhabited by Judge Tony Adeane, who is renowned for his hard-line stance on taggery. Since 2008, Adeane has been jailing taggers, who he said were making the area "look like a North American slum." (He really shouldn't talk about Canada that way.) Graffiti crime has allegedly been cut in half by virtue of this tough approach.

This makes the lobby of the Napier courthouse an especially bad place to tag, as Kelliher did.

The report says the duty solicitor (like a U.S. public defender, I assume) "could be seen flinching" as Kelliher's case was called. The judge glanced at the charges and then said, "well, that's not going to get a very good reception around here." (Kelliher was apparently seen on security cameras scratching a message of some kind into the wall of the foyer during a previous visit.) Noting that the Hawke's Bay area in general is not graffiti-tolerant, the judge said that "[a]nyone who comes in and graffitis this courthouse is going to get short shrift…. [You were] really leading with your chin." He rejected a suggestion of community service and held Kelliher overnight for sentencing. "An angry Kelliher was led from the dock and could be heard banging on his cell door for the next half an hour."

Today, or yesterday or whatever it is or was there in relation to the U.S., Adeane sentenced Kelliher to 28 days in a North American slum jail for his crimes. Tagging the courthouse showed "a disobedient and disrespectful personality," Adeane told the defendant, and deserved a "very firm response." Adeane again credited the hard-line policy with making Napier "mercifully free of this phenomena."

A quick look around Napier on Google Street View showed it to be a lovely place, and indeed no graffiti was apparent. I may not have been looking in the right place, of course. If they do have slums there, apparently they don't look like ours.

Note: Personal Sovereignty Claims Not Getting Any More Valid