As I'm sure you dorks all know, although the One Ring could turn its wearer invisible, it also had the power to influence and corrupt minds. Typically it caused those around it to become consumed with desire for the Ring and its power, but it could also cause dramatic personality changes over time. Now we have some evidence that it could actually cause a person's brain to completely disappear.

That's because somebody suspended a kid in Texas for bringing it to school. 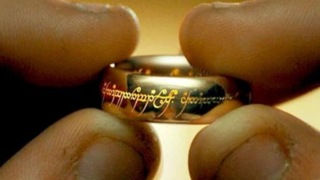 On January 30, a parent in Kermit, Texas, told everybody who would listen that his fourth-grader, Aiden, had been suspended for allegedly making a "terroristic threat." The family had been to see the third Hobbit film the week before, and Aiden brought a ring to class and told another boy that it could make him disappear (or, according to some reports, that he could use it to make the boy disappear).

It didn't do that, but it did cause whatever brain matter was rattling around in the adult skulls there to vanish completely.

In a press release Monday, the district said that it was legally prohibited from disclosing information on student discipline, and then stated that its teachers and administrators "certainly do not base disciplinary placement decisions on literary or cinematic references" as the media had been reporting. (That sort of seems like information on student discipline to me, but I'm not familiar with that particular law.) In fact, it isn't clear that LOTR had anything to do with this, except that it may have given Fourth-Grade Sauron the idea.

As you can see here, the ring in question wasn't a replica Ring or anything like that. It looks like one of those gray metallic rings that seem solid but that Earth magicians can cause to pass through each other in some way that no one can figure out. Aiden's father said that in fact his son likes to do magic tricks and (according to the report) that this ring "came from a box that said it contained magic rings." So unless Aiden has managed to do what Sauron couldn't and collect the whole set, I'm guessing that box is just one of those magic kits you can get at toy stores or wherever.

Aiden "does tricks for all his friends at school" all the time, his father said. "All the kids know him as being the magic man," he continued. "They think he has real powers." Maybe so, but they're nine years old. What did the adults think?

The press release of course doesn't say, because, as you know, the district is legally prohibited from disclosing information on student discipline. It says only that the teachers and administrators are well-trained and know the applicable code of conduct. It doesn't say which provision Aiden was charged with violating (for reason, see above), so I took a look at that code. I can't say I carefully studied all 31 pages of this document, but overall it did give me a new appreciation for how lucky I am to have survived a public-school education despite the lack of a carefully detailed and all-inclusive code of student conduct to restrain the behavior of those other little bastards. Anyway, assuming the district actually used the phrase "terroristic threat," the code defines that as "a threat of violence to any person or property with intent to" cause one of six categories of things to happen.

The U.S. Supreme Court actually is about to decide a case (Elonis v. United States) involving the "true threat" exception to the First Amendment. (See, this is why I have trouble keeping these things short.) The Court has already held that "true threats" are statements meant to "communicate a serious expression of an intent to commit an act of unlawful violence to a particular individual or group of individuals." The question in Elonis is whether proof of subjective intent is required or whether it's enough to show a reasonable person would have understood it as a threat. Here the district's policy requires intent, but the six categories are pretty broad. I don't think that matters here, though, because even if Aiden did threaten to make the other kid disappear with a magic ring, THERE IS NO SUCH THING AS A MAGIC RING. He might as well have been pointing a banana at the kid. Or maybe a pastry that he had bitten into the shape of a gun. I mean, obviously no one would suspend a kid who had bitten a pastry into the shape of a gun. That would be ludicrous.

"I assure you my son lacks the magical powers necessary to threaten his friend's existence," Aiden's father told the New York Daily News. "If he did [make his friend disappear], I'm sure he'd bring him right back." See? Not a true threat.

Update: I forgot to mention that Aiden has reportedly been suspended before, once for referring to an African-American student as "black," and once for "bringing a kids' book about pregnancy to school." Commenters on the local paper's website say the latter was actually "The Big Book of Knowledge," which among many other things appears to contain an illustration of a pregnant woman. (It also shows the Earth revolving around the Sun, so that's two strikes.) So, again, Kermit clearly has a zero-tolerance policy.

“Your Honor, First of All, I’m Not Smoking Crack”