The government is using the word "contraption," and that is probably more accurate but "robot" made the headline funnier. I don't know why. That's just how this works sometimes.

As I mentioned the other day, Paul Ceglia, who previously demanded half of Facebook and was later charged with fraud, is now a fugitive from justice. Just now I learned two additional facts (thanks, Elizabeth): (1) his whole family is also on the run, including the dog; and (2) Ceglia constructed a machine that was designed to keep his GPS bracelet in motion to give the illusion that he was still at home. 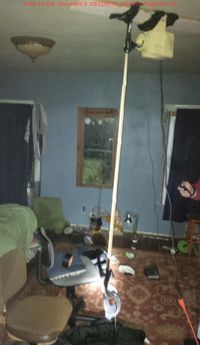 Because the Task Force Officers had been informed that Ceglia’s GPS bracelet was indicating that he was at his home, and because they could hear a mechanical noise coming from inside the home, the Task Force Officers forced entry into the home, both to check on the welfare on anyone inside, and to execute the arrest warrant. While conducting a security sweep of the home, the Task Force Officers observed, among other things, a hand-made contraption connected to the ceiling, from which Ceglia’s GPS bracelet was hanging. The purpose of the contraption appeared to be to keep the bracelet in motion using a stick connected to a motor that would rotate or swing the bracelet. A photograph of the contraption is attached as Exhibit C [see above]. Although the motor was making noise and appeared to be running, part of the contraption was disconnected, and was not in motion when observed by the Task Force Officers. They also observed a timer connected to the bracelet’s charger, a photograph of which is attached as Exhibit D. The bracelet reports to pretrial services when it is charging, and the timer’s purpose was apparently to mimic the report that would have been sent if Ceglia had been present and had plugged the charger in.

That's from the government's motion, posted here at Ars Technica, to dismiss Ceglia's interlocutory appeal of the trial judge's refusal to dismiss the indictment. (It's "interlocutory" because it's in the middle of a still-pending case. Trial was set for May 4.) Turns out that becoming a fugitive might jeopardize one's entitlement to appeal, at least according to the seemingly aptly named "fugitive disentitlement doctrine" that the pleading discusses.

I think this shows at least two things: (1) there are limits on what technology can do to protect us and/or control potential criminal behavior, and (2) Paul Ceglia has never heard of a Roomba. Seriously, Paul? This was what you came up with?

I will give him some small credit for not putting the bracelet on the dog and leaving him behind for this purpose. Maybe he can bring that up at the sentencing hearing.