As I mentioned a few days ago, I argued a case before the California Supreme Court on Tuesday. I thought some of you might be interested to see the checklist I put together to help me prepare: 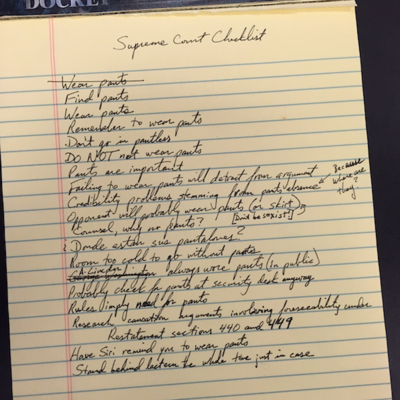 I forgot to do the research on the list but that specific issue didn't come up, luckily. Otherwise this was a success.

The argument itself seems to have gone pretty well, too. As an experiment, I limited each of my answers to 140 characters or less. The younger justices I think appreciated this but the others just kept saying "is that it?" Um, it's the 21st century, you guys. People have shorter attention spans now. (Note: don't refer to California Supreme Court as "you guys.")

The other funny thing was when a bat flew into the courtroom and the Chief Justice had to shoo it out of there with a broom. I argued it should be left alone until my opponent had finished his argument but they voted 4-3 to get rid of it right away. That's just how it goes sometimes. You never know what'll happen once you get in there.

I hope this has been instructive to those who may appear before the court in the future.