This is a pretty remarkable story for other reasons, too, including the parrot.

Not only was Rodriguez an utterly horrible human being, who was convicted of three murders (at least one involving torture), 29 kidnappings, theft, and lots of drug deals, he trained a parrot to insult his victims.

One Saul nobody should call [Daly wrote] is Saul Rodriguez, the 39-year-old crybaby killer who headed a murderous gang known to stash kidnapping victims in a basement with a large macaw parrot trained to repeat two words. 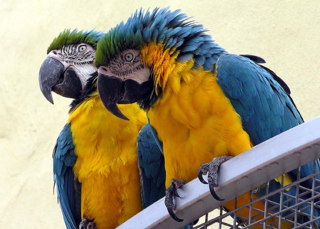 I guess they might have trained the parrot to say this just because they thought it was funny, and the fact that victims were stashed in the same room was just coincidence. But given the other stuff this guy did, I'm going to go out on a limb and say it was parrot torture.

He also killed his best friend and had someone's ears burned off, if the parrot thing doesn't impress you.

Rodriguez also enjoyed having thugs kidnap people he knew, and when they called him to borrow the ransom money (not knowing he had ordered the kidnapping) he would agree to loan it to them, with interest, of course.

Another fun thing is that he partnered up with a Chicago police officer, who had used him as an informant but later joined him in stealing drugs and drug money.  (The Chicago PD also had a history of torturing prisoners, so maybe this seemed not so bad.) The cop, Glenn Lewellen, was convicted and sentenced to 40 years, and Rodriguez originally got a slightly reduced sentence of 35 years. But when the judge learned he had been helping plan a murder from prison, that got revoked.

This is when the psychopathic-baby weeping happened.

Rodriguez appeared in Chicago federal court for sentencing last Friday and blubbered for what reporters estimated to be 10 long minutes, using tissue upon tissue as he begged for no more than 30 years.

Well, he say he don't want to do bad no more, but he do. Or at least that's what the judge decided.

As Daly also noted, the parrot unfortunately did not speak at Rodriguez's sentencing.

Post-Traumatic-Internet-Addiction Claim is Back in the News