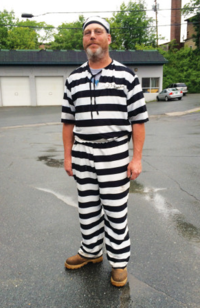 As a judge in Vermont warned this potential (but presumably unwilling) juror, doing this could get you a little jail time for contempt of court. That would most likely get you out of jury duty, though, at least for a couple of days.

Having said that, the strategy actually worked in this case. According to the report, after the man arrived, “[d]eputies directed him to an empty courtroom to meet with the judge….” He was probably wishing he’d brought an extra pair of striped pants at that point, but after giving him the warning, the judge let him leave.

It’s possible they just didn’t have an old-timey jail to send him to, I suppose. I wouldn’t show up in an orange jumpsuit, that’s for sure, lest you get confused with somebody who’s already supposed to be in jail.

The man told a reporter that the juror instructions didn’t restrict the type of clothing he could wear, which is the type of argument that, as we say in the business, won’t work.

Note to Self: No Grocery-Store Carjackings This Holiday Season