According to the BBC’s legal correspondent, Stephen Gough “almost certainly made legal history” by appearing in court “in his natural state” last week. I’m not so sure.

It would certainly not have been the first time anyone has appeared naked in a courtroom, if that’s what he meant. Even a quick Google search was enough to show that. See “Drama as accused appears naked in court,” Premium Times (Abuja, Nigeria, Feb. 5, 2013) (“Mr. Oduola, however, created an oddity in court when he appeared half naked, wearing only his shirt to the dock, thus exposing his private part.”). True, he was only half naked, but it was the relevant half. 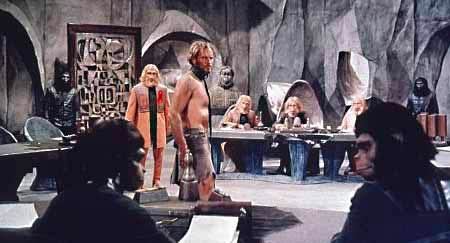 He might have meant that it’s the first time anyone has appeared naked in the UK Court of Appeal. Her Majesty’s Court of Appeal in England. It’s certainly possible that no one has done that before, but Gough didn’t actually do it, either. He was “appearing” by video from Winchester Prison, where he currently resides, and although he was indeed naked at the other end of the line, the report notes that his lower half was “obscured by a table.” So if he was neither physically in the courtroom nor depicted there fully nude, I don’t think we can actually say he was naked “in court.”

Gough’s failure to win also did not make legal history, because as you may recall, courts in both England and Scotland have repeatedly rejected his argument that he is entitled to roam about “in his natural human state.” See, e.g., “‘Naked Rambler’ Insists on Rambling Naked,” Lowering the Bar (Dec. 1, 2012). As of mid-2013, he had been convicted 28 times for some variation of disorderly-conduct charges or for violating an “Anti-Social Behaviour Order” enjoining him from public nakedness. This appeal was from what I think was conviction 29, for violating another ASBO in October 2014.

None of this deters him, obviously; more than once, he has been re-arrested upon leaving the courthouse naked “still clutching the order saying he had to cover up,” or for leaving a prison naked immediately after completing a sentence for the previous offense. So far as I can tell, he has never assaulted or hassled anyone directly, and he has repeatedly passed psychological evaluations. He just insists that there is nothing wrong with rambling around naked. Sometimes communities and/or their judges agree with him, but often they don’t, and as a result Gough has spent something like a decade in jail, all told.

It seems fair to wonder at this point what purpose is being served by locking him up. While I would certainly prefer that most people wear clothes in public, I’ve also noticed that when on occasion somebody doesn’t do that, civilization doesn’t collapse into chaos. (I live in San Francisco, but still.) If a naked person is crazy or dangerous or just unwilling to move on after being told to take his business elsewhere, that’s one thing. But all this guy wants to do is move on. He’s a rambler. Look the other way for a while, and he’ll be gone. That seems like a better solution to me.