On Monday, the Supreme Court held in Kimble v. Marvel Entertainment that a patent holder can't charge royalties for using an invention after the patent term expires. More accurately, it established that rule in a 1964 case, and held Monday that it wasn't going to change the rule even though it's been criticized. Patents last 20 years, but critics ask why parties shouldn't be able to make a deal that lasts longer if they want to. For example, if it would take many years to get the thing to market, that deal might make sense.

The majority decided not to change the rule because of stare decisis, which is Latin for "keep staring at that decision 'cause we ain't changing it now." Or, Justice Kagan put it a little more formally, "an argument that we got something wrong—even a good argument to that effect—cannot by itself justify scrapping settled precedent." For one thing, she wrote, we were interpreting a statute and so anybody who disagrees can always "take their objections across the street." (There are a couple of bars that are almost literally across the street, but it turns out she was talking about Congress.) The dissenters argued that the 1964 ruling was more judicial policymaking than statutory interpretation. If the Court shouldn't have done it to begin with, they said, it's not a big deal to undo it now. But that only got three votes.

The interesting thing about the case, of course, is that it involved Spider-Man.

The parties were fighting over Stephen Kimble's 1990 invention that, according to the patent, "makes it possible for a player to act like a spider person by shooting webs from the palm of his or her hand." Turns out this was not an entirely new idea, as at least one "spider person"—a spider-man, in fact—had existed in comic-book form since 1962. Maybe for that reason, Marvel felt entitled to design and market a web glove of its own. But drawing one and inventing a real one are two different things, and Kimble sued Marvel in 1997 for patent infringement. It later agreed to buy the patent for half a million bucks plus a 3% royalty on future sales—forever. The contract did not have an end date, even though the patent term did. Apparently neither party was aware at the time that because of the 1964 decision, the law didn't allow Kimble to collect royalties past the 20-year mark. "But Marvel must have been pleased to learn" of that decision, Justice Kagan wrote. It was pleased again this week.

As usual, Justice Kagan's opinion is really well-written, and includes some not-too-veiled Spider-Man references, such as referring to a "superpowered form of stare decisis," the effect on an existing "web of precedents," and reasons for "sticking with" existing precedent. (Justice Alito used the term "super-duper" in his dissent, but I'm not sure he was trying to be funny.) Better in my view is the bit in the conclusion where she points out that although the Court has power to change the law, "stare decisis teaches that we should exercise that authority sparingly. Cf. S. Lee and S. Ditko, Amazing Fantasy No. 15: 'Spider-Man,' p. 13 ('[I]n this world, with great power there must also come—great responsibility')." Nicely done. 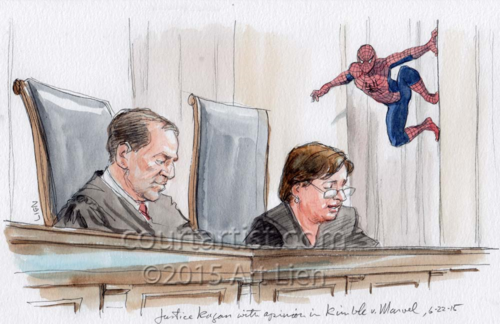 I assume Spidey was only there to make sure nobody was claiming he had to pay royalties on something he's been doing for more than fifty years now. D.C. is not the best city for him to operate in, though, because there are no tall buildings. Did he take the bus in as Peter Parker?

Art Lien kindly granted permission to re-post his sketch. He's been sketching the courts since 1976, mostly covering the Supreme Court for NBC News. You can see lots of other cool drawings and buy prints at his website, courtartist.com.

The Tri-State Monkey Smuggle, and Other Stories