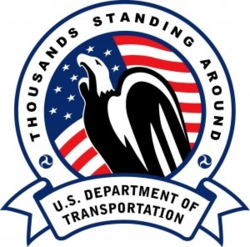 The headline of this post is also the slightly understated title of this DHS Inspector General report, which notes that TSA failed to block someone on the terrorist watchlist from getting a job at an airport. And by "someone," I mean 73 someones.

Oh, wait, I'm trying to be more positive about these things. So, more positively, the DHS IG—who I'd like to thank for doing so much of my work for me lately—was only able to find 73 instances in which someone "with links to terrorism" was given a job that allowed him or her free access to secured areas of commercial airports. Just a few dozen people were located who worked for "major airlines, airport vendors, and other employers"—undefined, but hopefully not ISIS—so well under 100 people linked to terrorism were, as TSA acknowledged, "cleared for access to secure airport areas despite representing a potential transportation security threat."

You know what, that doesn't seem all that positive. Well, I'm doing my best here.

Of course, the report is redacted so that we don't know exactly what sort of threat these people posed. Since the "terrorist watchlist" is largely bullshit anyway, probably not much threat at all. But we don't know. One of the redactions, for example, reads like this:

Who … had blown up a plane? Sold drugs? Run errands for Carlos the Jackal? Made fun of the TSA? What? It'd be nice to know. Oh, here's another question—did you possibly fire that person, or are you just going to watch and see if they get into any trouble with that security badge?

TSA, of course, blamed other agencies, specifically for not giving it access to certain "terrorism-related category codes." It wants those, and as we've seen repeatedly, giving the TSA more stuff always ensures that security will be enhanced, so let's all get on board there. But the IG did also note that TSA does not always have, shall we say, the best possible information to use when checking someone's name against the Consolidated Terrorist Watchlist. Like, the person's first name.

Specifically, we identified over 1,500 records in TSA's screening gateway where an individual's first name contained two or fewer characters; over 300 contained a single character.

I guess we don't have to worry about "C.T. Jackal" or "Mr. O.B. Laden" anymore, but this is still a little concerning. I mean, if you have a list of names, and you want to see if someone's on the list, it would be best to have that person's full name, wouldn't it? I'm not a list-checking expert, but that's my belief.

Again, for the most part the TSA's comments on the report (the IG attaches these to its reports, just for grins) blame others. If you read carefully, though, the TSA appears to admit that its vetting systems have not been all they could be.

Specifically, it notes that it has "made great progress in improving the quality of data in TSA vetting systems," that it "made numerous system enhancements … between 2012 and 2014," and that "[a]s data anomalies were identified, TSA took immediate action to diagnose and implement corrective actions." That's about as close as a bureaucracy gets to admitting that its data sucked—admit that it has now "greatly improved." And this great improvement is why, today, we can rest easy knowing that only 73 potential terrorists—a number smaller than the total number of U.S. senators!—have been free to roam around secured airport areas at will, and some may still be.

Best of all, since they have badges, they don't even have to wait in line like you do.

Town Forgets to Have Election Again