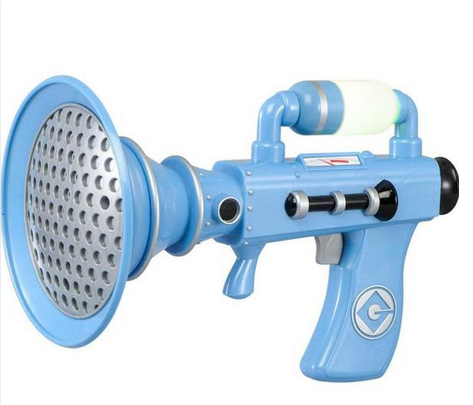 For once I'm not going to be criticizing the TSA, but that's only because the TSA wasn't involved here in any way. Although it wouldn't surprise me if they have been meeting with their Irish counterparts supposedly to exchange nonsensical "security tips" but really to get free trips to Ireland at taxpayer expense because the $60 billion they've already filched from us doesn't seem like enough, and in the process some of their bad judgment rubbed off on the people at Dublin Airport.

Well, I guess that was kind of critical of the TSA, actually. I tried.

Here's what airport security took from a three-year-old on Saturday (The Independent, Nothing To Do With Arbroath): 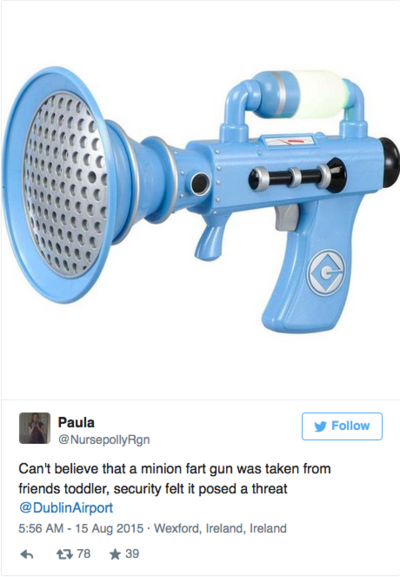 As Paula pointed out, this is a replica of the "Fart Blaster" wielded by the minions in "Despicable Me." So I guess it does have a track record of being used for evil purposes. But in real life it doesn't do anything except make noise and apparently emit an odor that thankfully is said to be banana-scented. Do I want a kid to wield one of these on a plane? No. Does it need to be confiscated by security personnel? No.

And of course they didn't confiscate it because they care that it might annoy other travelers. They confiscated it because—wait for it—it violated the rule against "replica guns." And this was despite the fact that, according to the kid's mother, the security officer admitted that his own child has the very same toy.

"We don't make the rules but we apply the rules consistently," an airport spokesperson said. "Anything that is a replica gun with a trigger mechanism on it is listed as a prohibited item." Well, if it didn't have a "trigger mechanism," it wouldn't be a very good replica, but the larger problem here really seems to be confusion OVER WHAT THE PHRASE "REPLICA" MEANS.

This does suggest some sort of TSA influence, because our resident geniuses have repeatedly invoked this rule—which I had presumed was meant to keep out things that look something like actual weapons—to confiscate things as ridiculous as a ray-gun shaped belt-buckle, a cane shaped like a lightsaber, and a two-inch long revolver strapped to the side of a sock monkey. What is the point, please? Of course, given the state of things over here, I guess we couldn't entirely rule out the chance of a tragic incident stemming from a three-year-old's poor decision to menace a cop with a Fart Blaster, but this happened in Ireland.

The spokesperson noted that the toy was "being kept safe at the airport" so the child can get it back when the family returns, so that's nice. Over here, they'd probably go ahead and blow it up just to be safe. Can't be too careful.

Citing Authority, Scalia Argues Cogently That His “Obscene Gesture” Was Misinterpreted As Such

Felon Who Died in Tragic Fall Found Alive in Closet

Plaintiff: This Soap Did Not Attract Women as Promised