As you can probably guess, they didn’t get all of them. 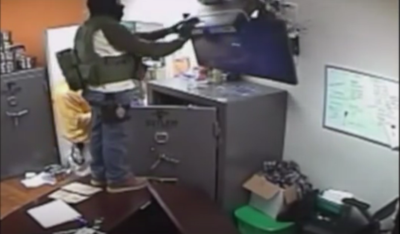 About a week ago (ars technica, Orange County Register), some of the officers who raided a medical-marijuana shop in California asked a judge to suppress a video of their actions on the grounds that they didn’t know they were being recorded. California is one of the states in which it is illegal to eavesdrop on or record a “confidential communication” unless all parties consent. (It doesn’t apply to law enforcement, of course, or, you’ll be glad to know, to hearing aids.) What is a “confidential communication,” exactly? I’m glad you asked:

The law authorizes a civil lawsuit against the recording party, and also says that any illegal recording is inadmissible.

The apparently novel argument here is that although the officers were fully aware that the shop had a surveillance system—in fact, it was required to have one by law—they claim they had a “reasonable expectation of privacy” in the shop once they thought they had successfully destroyed the system. They did, but they missed the backup surveillance system of hidden cameras, probably designed to catch people who try to destroy the visible ones. Oh dear.

Because the resulting video appears to show the officers engaged in questionable conduct like insulting disabled customers, playing darts during the raid, and possibly even eating a pot brownie, they would like the video suppressed so that it can’t be used against them in the department’s investigation of their conduct. They filed this request for a TRO, arguing that they might suffer “irreparable harm” because they might get fired or demoted based on the evidence of what they did. The business has sued the department based in part on the same evidence. (As the video itself states, it has been edited by the business’s attorneys, who have also added some commentary. We don’t yet know what’s missing, but judge for yourself what it shows.)

A judge heard argument on this last week but deferred a decision (another hearing is set for Thursday). He did express some reservations, though, saying “I’m troubled by the fundamental request of halting an investigation based on the theory that the recording that’s triggered this investigation is illegal.” Right, because it seems troubling that police could suppress evidence of their wrongdoing by trying really hard to destroy that evidence or prevent it from being gathered in the first place. That’s what he’s saying, right? I hope that’s what’s troubling him.

The business’s lawyer cites a case called People v. Nazary, in which a defendant tried to argue that a video should be excluded from his embezzlement trial for similar reasons. The court noted that he was clearly aware that the business owner had installed cameras, partly because he had “plaster[ed] over them as soon as he knew of their existence,” so it wasn’t “objectively reasonable” to expect later conversations there to be private.

In other words, the court did not reason that, because he thought he had successfully plastered over all the cameras, he could reasonably expect privacy there in the future. Sorry—you have to take the risk that you may have missed one, which should be the problem for the cops here, too.

Update: Techdirt reports that on August 19, the judge rejected the officers’ TRO request, saying that they “had no objectively reasonable expectation that their words and actions would not be observed” during “their on-duty performance of an official function at a marijuana dispensary.” Apparently he didn’t specifically say that trying to smash all the security cameras will not make a difference, but he necessarily rejected that argument.