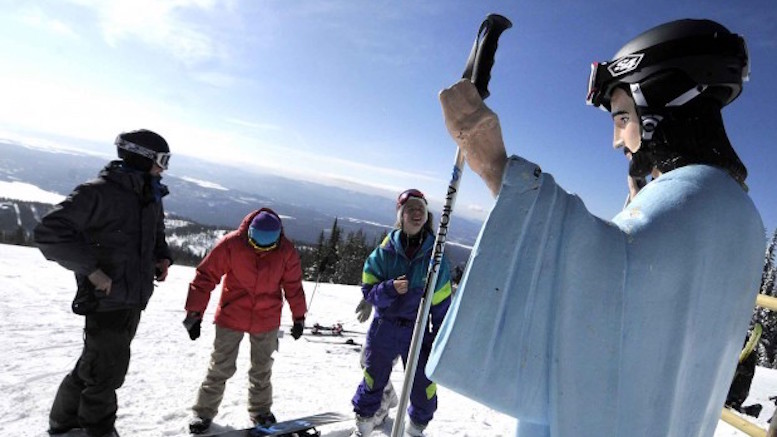 In a split decision on August 31, the Ninth Circuit Court of Appeals held that Big Mountain Jesus need not move to a different location.

If, like me, you assumed that “Big Mountain Jesus” was a DJ or band of some sort, you were incorrect, although that would in fact be a pretty great DJ or band name, if not 100% original. For now it refers only to a 12-foot-tall statue of Jesus that stands near Chairlift Two of the Whitefish Mountain Ski Resort in Montana. Because the statue is on federal property, it has been the focus of a dispute about whether allowing it there violates the principle of separating church and state. The Freedom From Religion Foundation sued to have it removed, but the Ninth Circuit has ruled that it can stay.

As an aside, let me point out that the name “Big Mountain Jesus” is a little confusing. For example, it might refer to the fact that this is a fairly big statue of Jesus located on a mountain. It is by no means the biggest such statue; for example, Brazil’s “Christ the Redeemer“—which I just successfully looked up by Googling “Rio Jesus,” which somehow seems wrong—is nearly 100 feet tall not counting the pedestal, and looms atop 2,300-foot Mt. Corcovado. But Big Mountain Jesus is certainly the biggest Jesus on its particular mountain.

On the other hand, the mountain it’s on is actually called “Big Mountain.” 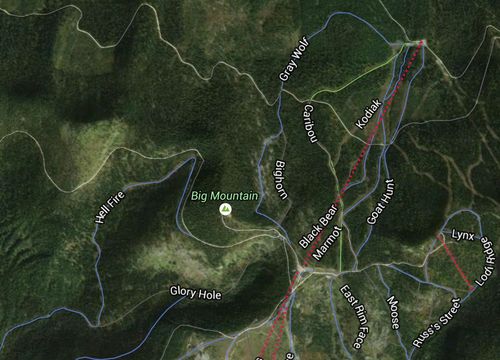 Given some of the other options, I’m glad they called it “Big Mountain” Jesus.

According to trail maps, the statue is a little further south, but that location still seems to be a lesser peak of Big Mountain. So “Big Mountain Jesus” could simply mean “the Jesus on Big Mountain,” not that the statue itself is particularly big. We may never know.

I guess I could also complain that it’s a pretty lazy mapmaker who names a mountain “Big Mountain” in the first place—oh, is it near “Dry Desert” or “Wet Lake”? Man, get a thesaurus!—or that nobody has a clue what Jesus really looked like, so this statue could in fact represent anybody or nobody at all. But let’s set those issues aside for now.

Everybody agrees that it is intended to be a statue of Jesus, and that it is on federal property and has been for decades. Determining whether a government action or policy violates the Establishment Clause of the First Amendment requires a court to consider whether the action or policy has a predominantly secular purpose or has the effect of endorsing religion. Trunk v. City of San Diego, 629 F.3d 1099, 1106 (9th Cir. 2011). In Trunk, for example, the court held that a cross had to go; although it found the property had been acquired for a predominantly secular purpose, it decided that under the circumstances of that case, allowing the cross to stay where it was tended to endorse religion.

Here, both sides seemed to have decent arguments, and the court came out the other way based on these facts. There was some evidence that the statue was originally put up to honor soldiers who had seen similar statues in Italy during WWII, not specifically as a religious monument, so that suggested a mainly secular purpose. The majority also didn’t think that the circumstances here tended to show that the government was endorsing religion: it’s Jesus on a mountain, not on the capitol grounds; it’s privately owned; and locals see it as more of a landmark or meeting place than a religious shrine.

Dude, that last run was miraculous

Also, the court noted, “the flippant interactions of locals and tourists with the statue suggest secular perceptions and uses: decorating it in Mardi Gras beads, adorning it in ski gear, … high-fiving it as they ski by, and posing [with it] in Facebook pictures.” An attorney for the Forest Service highlighted this point during oral argument, according to The Missoulian: not only do the locals treat it as a secular landmark, she noted, “it’s usually wearing a ski helmet.” Looking at all the circumstances, in short, two of the three judges were convinced that this statue doesn’t violate the Establishment Clause.

One judge dissented, and let me summarize his argument: it’s Jesus. The one from the Bible. A statue of Jesus on government property. Is this difficult?

Well, maybe we should have a bright-line rule of that kind, but we don’t.  Courts have to look at all the facts, and while this seems like a close call I can’t get too worked up about the result. I’m okay with people having the right to keep the statue there, as long as other people also have the right to hang Mardi Gras beads on it every now and then without things getting violent.

I will go ahead and propose “can we hang Mardi Gras beads on it without things getting violent” as a pretty good rule of thumb for these situations. If we can, it can stay. If not, we have a problem.