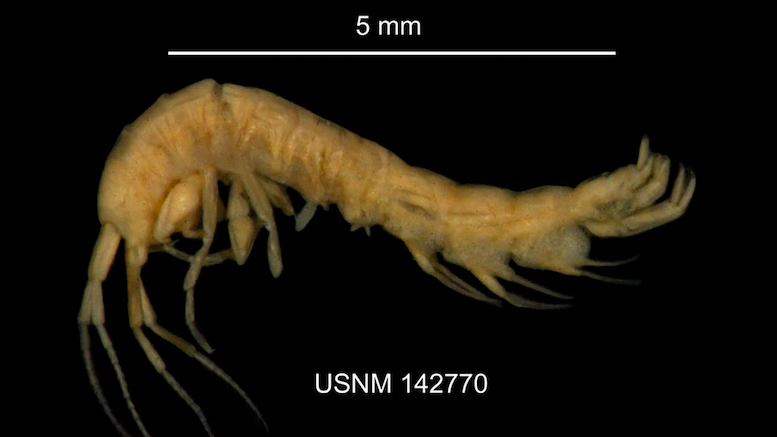 As I mentioned back in April, although the District of Columbia is not a state it has adopted a few official things just like all the states have. At the time of that post it had limited itself to an official flag, fruit, and dinosaur, but as Sadie Dingfelder of the Washington Post reported this week, it is about to add an official amphipod to the list.

It will be the first state or state-like jurisdiction to have its own amphipod, which may not be too surprising since I, for one, had no clue what an amphipod might be, and I know lots of useless crap. “Amphipod” could be a pretty good band name or maybe the name of a car that turns into a submarine, and if Elon Musk is planning to make a car like that I would appreciate a small donation for that idea, and just a few million should be plenty (negotiable, call me). But in fact it is one of these: 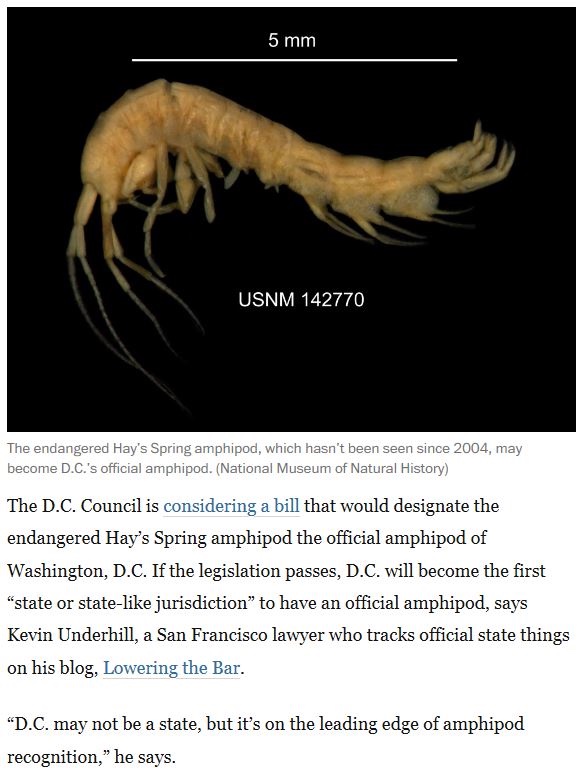 Oops! Looks like I forgot to edit out the part where the Washington Post quotes me as an expert on official state things, but what can you do?

Anyway, although it looks like a shrimp, it isn’t. Amphipods are related to shrimp, as I learned via some probably non-billable research earlier this week. Shrimp, crabs, and crawfish (among zillions of other things) are all “decapods,” a subtype of crustaceans that happen to have ten legs. Amphipods have 12, and are part of a different branch of the crustaceous tree. So all amphipods are crustaceans, but not all crustaceans are amphipods. Got it?

“They look neat,” actual amphipod expert Prof. David Culver says in the Post article, “and they live in these ridiculous little habitats. They are absurd.” I didn’t expect that last sentence from an amphipodologist, and it cracked me up—but they are in fact kind of absurd.

All the more reason they should be protected, as far as I’m concerned, and raising awareness about that is really why D.C. may make them “official.” At least 13 kinds of amphipod have been found in the D.C. area, according to the article, although the proposed legislation ignores 12 of them in favor of the Hay’s Spring amphipod (stygobromus hayi)  an endangered species found only in a few places within Rock Creek Park. If there is some reason to hate, for example, Kenk’s amphipod or Shoemaker’s crangonyctid (also an amphipod), I don’t know what it might be and the article doesn’t say. To me Hay’s looks a little more photogenic than the others, so maybe that’s it.

Four other states (Alabama, Louisiana, Maryland, and Texas) have official state crustaceans, but none of those are amphipods. So D.C. would be the fifth jurisdiction with a state crustacean, but the first to have its own amphipod. Obviously, the latter works better for publicity purposes.

The bill would also make the Atlantic shad D.C.’s official state fish, but whatever.

Yet Another Comical Case Name

Legislation Breaks Out During Brawl in South Korean Assembly