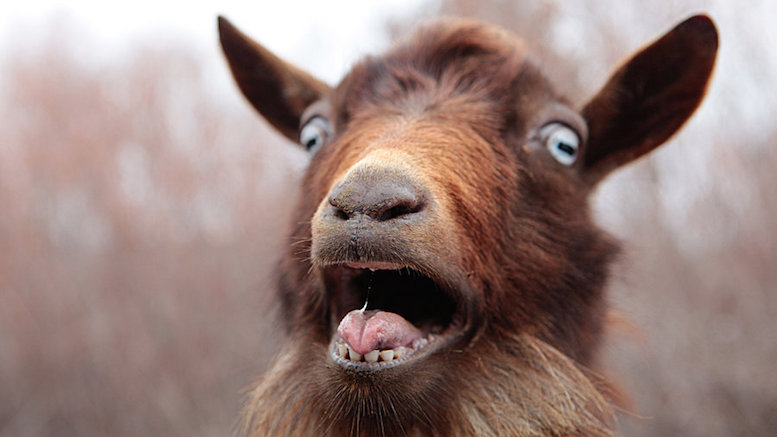 “Did Augustus Sol Invictus really sacrifice a goat?” GQ asks, but I think that headline is misleading because the article doesn’t actually answer the question. Nor is there an objective way to answer it conclusively, because there were only two witnesses to the event and one isn’t talking. All we can say is that Augustus Sol Invictus claims he sacrificed a goat to a pagan god of the wilderness, and that he drank its blood. Yes, that’d be admissible evidence against him in a trial for goat murder, but that doesn’t mean it’s actually true.

It is true that he’s running for the Senate, though.

It is also true that he’s a member in good standing of the Florida Bar, according to the bar’s website: 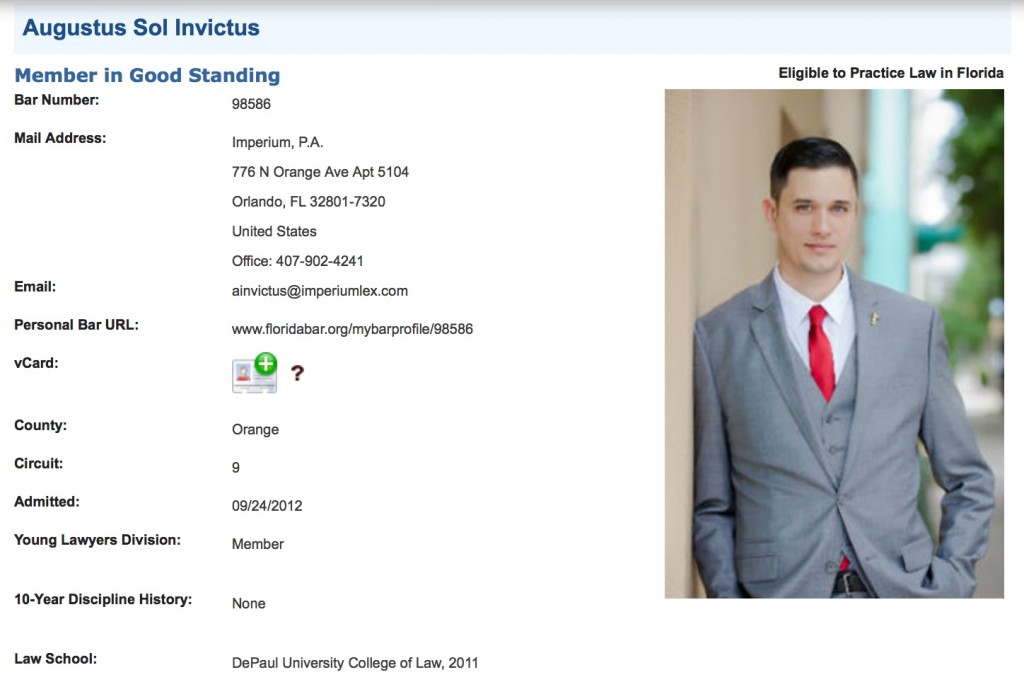 As that suggests, Augustus Sol Invictus is his real name, although it took a legal name change to obtain it. (He hasn’t disclosed his given name, so I assume it was way less cool.) Why that name? Good question.

“Sol Invictus” is Latin for “unconquered [or invincible] sun,” and this was the name the Romans used for the sun god they worshipped (among many others) back when the Empire was still pagan. Yes, it’s also the name of a Faith No More album, but I think we can assume he’s alluding to the Roman sun god because he chose the first name “Augustus” and, in an equally subtle allusion, he calls his law firm Imperium, P.A. [Note: several links on this page originally went to his website at imperiumlex.com, but as of 2017 that site is now defunct.]

So when you’ve named yourself something that translates roughly to “Majestic Invincible Sun,” I guess it makes sense that you would go into politics. Invictus announced his candidacy in May, but it gained some prominence recently after the state chairman of the Libertarian Party, of which Invictus is a member, resigned for the specific purpose of calling attention to the candidate and his views, and more specifically the fact that he thinks Invictus’s views are “absolute insanity.”

Well, yes and no.

In his speech announcing his candidacy, Invictus stated that at the “core of … his passion for public office” are (1) “a sound monetary policy,” (2) “the restoration of civil rights for all Americans,” and (3) “my vehement opposition to the drug war being waged by the Government against its citizens….” None of those are insane … although I do get a little spooked by anyone with a “passion” for “sound monetary policy.” In fact, they all sound perfectly sane.

He did drink the blood of a goat, though, so maybe the devil is in the details?

The Orlando Sentinel says the goat incident followed Invictus’s decision two years ago “to walk from central Florida to the Mojave Desert,” where he “spent a week fasting and praying, at times thinking he wouldn’t survive.” Those thoughts are understandable, since he had just walked 3000 miles and then spent a week without eating in the Mojave Desert. But he did survive, and “[i]n a pagan ritual to give thanks when he returned home, he killed a goat and drank its blood.” Well, you know how ugly campaigns can get. He probably didn’t say or at least didn’t mean that he literally sacrificed a goat—

I did sacrifice a goat. I know that’s probably a quibble in the mind of most Americans. I sacrificed an animal to the god of the wilderness…. Yes, I drank the goat’s blood.

Also, I’m not sure that’s how most Americans would use the word “quibble.”

According to Adrian Wyllie, the party chairman who resigned in protest, there is more to worry about here than pagan worship or goat safety. “[Augustus Sol Invictus is] a self-proclaimed fascist,” Wyllie claimed. “He’s promoting a second civil war…. This guy has no place in the Libertarian Party.” Wyllie also charged that Invictus is trying to recruit neo-Nazis to the party. Invictus has denied these charges.

I can’t claim to be an expert on his views, but I did skim his five-part series, “The Authoritarian Foundations of the Presidential Office,” which you can find at his website. The thesis seems to be that the Framers intended the American presidency to be more or less an elective monarchy, but it’s not totally clear whether he thinks that was a good or bad thing. He does write at one point, “It may seem counterintuitive to begin a paper on the American presidency by quoting approvingly the central document of Italian Fascism,” and you know what? It kind of does. But I have asked him to comment on this, so maybe he will clarify.

Update: Augustus wrote back to say he was having trouble accessing my new website, but maybe he eventually succeeded because I didn’t hear from him again. I did see this lengthy article about him on Reason magazine’s website, which says that in 2013—I assume just before he left to go trekking in the Mojave—he sent some people, including some law-school classmates, a letter that is either performance art or fairly troubling. Above the Law had the full letter at that time. It is pretty remarkable, and ends like this:

I have prophesied for years that I was born for a Great War; that if I did not witness the coming of the Second American Civil War I would begin it myself. Mark well: That day is fast coming upon you. On the New Moon of May, I shall disappear into the Wilderness. I will return bearing Revolution, or I will not return at all.

War Be unto the Ends of the Earth,

So that clarifies things a bit.

Update II: It may clarify them a lot, because as someone (thanks, Mark) pointed out to me, “XX Aprilis”/April 20 is Adolf Hitler’s birthday. (In 2013, April 20 was a Saturday, which explains the rest of that phrase.) Could it be just a coincidence that Augustus sent his “Great War” letter on that particular day? Sure. How likely is that? Well, according to the internet, the probability that two random people will have the same birthday is 0.27%. Here we’re just replacing one of the birthdays with some other random event. Right? So not very likely.

What are the odds that a person who sent a letter like this one on Hitler’s birthday will later drink goat blood in the Mojave Desert and then run for the Senate? Apparently better than we thought.

Update III: Invictus did not win the election, although 1,063 people somehow voted for him. Note that earlier versions of this post incorrectly stated that he was running for the Florida Senate. He was in fact running for the U.S. Senate, but lost in the primary.

Is an Alligator a “Deadly Weapon”?

UPDATED: Soccer Player Blames the Baptists for Ruining His Career

Man Arrested After Bragging About Unsolved Robbery on Talk-Radio Show