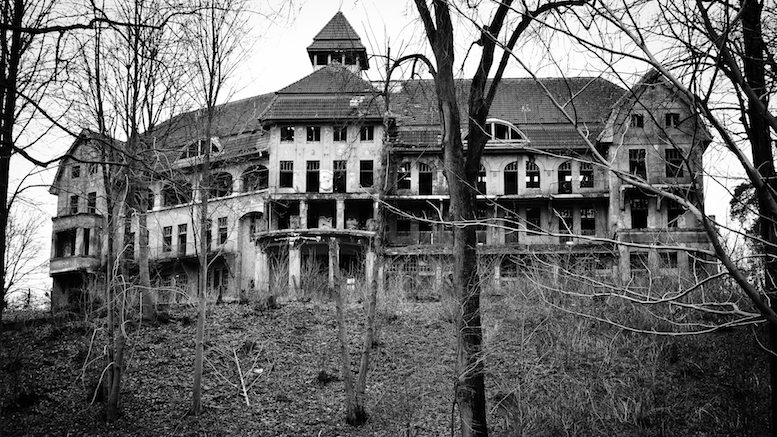 Assume the risk, all ye who enter here (image: Das Geisterhaus by Harald Hoyer, via flickr)

I hope this doesn’t come too late, but you should know that if you get hurt while running away from a chainsaw-carrying maniac, you may not be able to sue him.

Of course, if he and his family are planning to eat you, this should be the least of your worries.

Just a week short of Halloween, the California Court of Appeal held that, in the absence of unusually reckless conduct, the proprietors of a “haunted house” attraction are not liable for injuries that patrons may suffer due to having the crap scared out of them. This particular case, Griffin v. The Haunted Hotel, arose out of Griffin’s visit to one of the defendant’s attractions in 2011, when this happened:

After passing what he believed was the exit and “giggling and laughing” with his friends about how much fun they had, Griffin unexpectedly was confronted by a final scare known as the “Carrie” effect—so named because, like the horror film Carrie, patrons are led to believe the attraction is over, only to be met by one more extreme fright. This was delivered by an actor wielding a gas powered chainsaw (the chain had been removed), who approached Griffin, frightened him, and gave chase when Griffin ran away. Griffin was injured when he fell while fleeing. [He hurt his wrist.] Griffin sued … alleging negligence and assault.

The trial court dismissed the case, applying our old friend the primary-assumption-of-risk doctrine. As you may recall from such cases as The One Where the Royals Mascot Hit a Dude in the Eye With a Hot Dog or The One Where the Dude Walked Into a Bonfire, this doctrine provides that a defendant has “no duty to eliminate or protect a plaintiff against risks that are inherent in a sport or recreational activity.” It sounds simple, but isn’t, because of issues about what “activities” qualify and what risks are “inherent” in it. In fact, the bonfire case was one of the first in which a California court was willing to apply the doctrine to something that wasn’t a traditional “sport.” A court did hold once that riding on an inner tube pulled by a speedboat was a “sport,” which I thought was questionable (apologies to any competitive tube-riders out there).

The doctrine is a little more flexible now, as you can see from this case. The “Haunted Trail” is an outdoor attraction featuring “actors in ghoulish costumes who frighten, startle and sometimes chase patrons amid loud noises and flashing strobe lights in a one-mile loop” in a California park. Patrons follow a narrow trail through the park, and “along the way, actors jump out of dark spaces or spring from around corners, often inches away from patrons, holding bloody prop knives, axes or other weapons, or a severed body part.”

So, not one of the traditional “sports,” in other words.

But it is an activity that is reasonably well understood by potential patrons, even setting aside the disclosures and disclaimers that people get. As the court noted, Griffin’s ticket referred to “high impact scares” and things “not suitable for people with heart conditions.” The attraction’s website warns that running away could cause injury and that the ground in the park may be uneven. But that’s express assumption of risk—primary assumption of risk is the argument that a risk is inherent in a recreational activity and if you eliminated it, you would basically make the activity impossible. As long as the defendant didn’t unreasonably increase that risk somehow—no landmines in football, for example—there’s no liability.

The Court of Appeal agreed that this rule applied here. “[T]he point of The Haunted Trail is to scare people, and the risk that someone will be scared and react by running away cannot be eliminated without changing the basic character of the activity. As the trial court aptly noted, ‘[W]ho would want to go to a haunted house that is not scary?'”

The court also rejected an amusingly creative attempt by Griffin to distinguish between the kind of fear involved. “Griffin contends his injuries were not caused by his reaction to ‘fun’ fear,” but rather his fear of “the real, actual danger of physical injury” the chainsaw-wielder was creating, apparently the not-fun kind of fear. (The court referred to this as the “scary fear” theory, which I thought was pretty good.) But his subjective state of mind didn’t matter, the court held, because this is a legal question about the nature of the activity.

Finally, it also rejected the argument that the defendant or its employee acted recklessly. That means consciously ignoring a high probability of danger to others, the court pointed out, and Griffin’s only evidence was that 10 people had fallen down under similar circumstances. Given that The Haunted Trail has processed at least 250,000 victims in 14 years of operation, the court concluded, this didn’t establish a “high probability.”

Basically, the court summed up, Griffin paid to get scared, and that’s what he got. “At bottom, his complaint here is [that the defendant] delivered on its promise to scare the wits out of him.” The fact that it did so by hiring “a chainsaw-carrying maniac” to chase him didn’t give him the right to sue.

There have been several similar cases, in fact, for some reason mostly in Louisiana. (This probably has to do with my search terms, not the state, but I could be wrong.) Those plaintiffs, too, either fell down or ran into a wall as a result of scary fear, and in every such case the court found for the defendant. See, e.g., Galan v. Covenant House (La. Ct. App. 1997) (also involving a chainsaw-carrying maniac); see generally Daniel Moar, “Case Law From the Crypt: The Law of Halloween,” 83-Oct. N.Y. St. B.J. 10 (Oct 2011) (discussing these and other Halloween-related cases); cf. “Scary Laws, Torts & Crimes (and Ashley Madison): A Halloween CLE,” Mecklenburg County (N.C.) Bar Assoc. (Oct. 29, 2015) (which has already happened but was a great idea for a CLE, and not just because it was held at a beer shop). So assumption of risk seems to be firmly entrenched in this spooky area.

My search for “haunted house” turned up a few other cases that were amusing only because of the name, but here they are:

Finally, there is another kind of “haunted house” law, of course, but rather than extend this further I’ll direct you to this post on Stambovsky v. Ackley, a Hall-of-Fame real-estate case where the court held a house was haunted as a matter of law.

Be careful out there this Halloween.