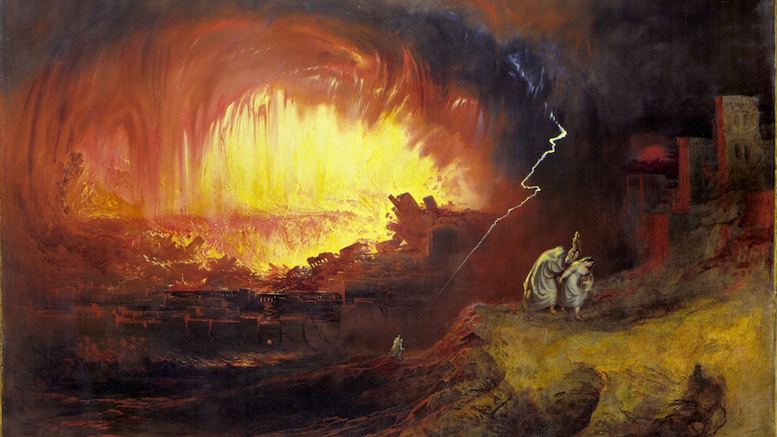 The citizens of Blount County, Tennessee, remain vulnerable to God’s wrath now that a resolution asking Him to spare the county has been tabled. Concerned that the Lord will take vengeance on America for allowing same-sex marriages, County Commissioner Karen Miller sponsored a resolution calling on all state officials to defy the Supreme Court’s decision, and also, while she was at it, calling on God to “pass us by in His Coming Wrath”:

The Commission met on Tuesday night for the purpose of setting the agenda for its main monthly meeting next week. As Raw Story pointed out, this particular item was only seventh on the agenda-setting agenda, which suggests it is not quite as high a priority as the resolution’s text would lead you to believe:

Yes, budget items are critical, but it seems like you’d at least take up any concerns about the Coming Wrath of God before debating proposed interlocal highway maintenance cooperation agreements. But maybe they have to do them in numerical order. I don’t know what the rules are.

In any event, it turned out the only business the Commission took up was whether and when to adjourn, which got moved way up the agenda after hundreds of people showed up to protest the resolution. (To be fair, five also showed up to support it.) The commissioners quickly brought up and defeated a motion to set next week’s agenda and then unanimously voted to get the heck out of there.

This leaves the Commission with no business to consider for the month, unless a special meeting is called, and I don’t know what the level of enthusiasm for that might be. It also, of course, leaves Blount County vulnerable in the meantime to being destroyed with fire and brimstone.

My first reaction to this story was to wonder why, if God had decided that the people of the county had become wicked and should be destroyed, He would change His mind because the commission passed a non-binding resolution. Then I got the reference to the Passover story:

Then they are to take some of the blood and put it on the sides and tops of the doorframes of the houses where they eat the lambs…. On that same night I will pass through Egypt and strike down every firstborn of both people and animals …. The blood will be a sign for you on the houses where you are, and when I see the blood, I will pass over you.

Exodus 12:7-13 (New International Version). So, okay, there is precedent for a demonstration of faith—that’s how I interpret it, anyway, not as a suggestion that otherwise God might get the wrong address—sparing believers from destruction. But each person (or family) has to do it themselves; it’s not something you can delegate. “All right, so next up would be the proposed resolution stating that the people of Israel, i.e., those listed in Exhibit A to said resolution, are on the side of the Lord and don’t want to be killed, and I don’t know why this was seventh on the agenda but I would move that we extend the session so that we can take it up tonight…. Hearing no objection, the motion carries.”

I don’t think that’s how it works.

After I started this piece the local Daily Times reported that there will indeed be a special meeting next Tuesday night, but the anti-wrath resolution will not be on the agenda. Well, maybe just introducing it was enough to at least postpone the wrath for a couple of weeks.